Picture in your mind the prettiest birds out in the field. Which do you think of first? Bright red northern cardinals perched on twigs contrasted against a barren winter landscape? Blackheaded northern orioles with chests that boast a burst of fiery orange? Flashy blue jays with their snowy white bellies and noble crests? Chances are the common grackle was not a bird that came to mind. And yet, this common black bird with a blue head is quite beautiful in its own way. With its glossy black plumage and head of iridescent green and blue, the common grackle is a truly striking bird.

Oh, but don’t these birds know it! There’s nothing common grackles love more than strutting around front yards and in open fields or gathering in high trees and chattering noisily. Voracious eaters, smart and mischievous, they move in large flocks gathering up every morsel of food in sight and will devour an entire corn crop if they can get away with it. Entitled is what I’d call them. Pretty birds that they are, they’d be a lot more likable if they weren’t quite so full of themselves! 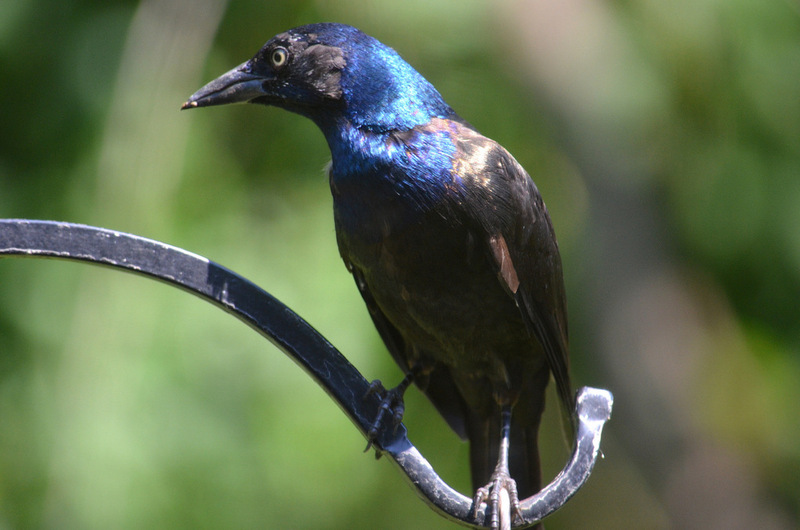 Come On And Let Me See You Shake Your Tail Feather

Common grackles (Quiscalus quiscula) look like elongated blackbirds measuring out at about 12-1/2 inches, but their tails make up nearly half of their length. As with most birds, it’s the adult males that have the hot bods. These pretty boys feature bright, golden-yellow eyes, iridescent blue-green heads, glossy, bronzed bodies with purple and blue iridescence on their wings and tails. During mating season, the males hold their tails in a V-shape while flying, similar to the keel of a boat. Do they think it makes them more attractive? Who knows? But it must mean something, because the females don’t put on the same show. Females also differ in their size. They’re smaller and they tend to sport a duller sheen.

Those familiar with Alfred Hitchcock’s The Birds, may draw comparisons between common grackles and the violent, attacking flocks of crows depicted in the 1963 movie thriller. Not to worry. Although the grackle name was derived from the Linnaean genus Gracula, which refers to the Jackdaw, a member of the corvid family, grackles and crows are indeed not related. Crows, like ravens, are corvids, but common grackles belong to the Icteridae family. Icteridae relatives include rusty blackbirds, charming Baltimore orioles, sweet-sounding meadowlarks and redwinged blackbirds. There are three subspecies of the common grackle, including the bronzed grackle, the purple grackle, and the Florida grackle. Common grackles weren’t in any Hitchcock film to my knowledge, and if they decide to visit your bird feeders, there’s really nothing at all to worry about.

Of course, that doesn’t explain why a flock of common grackles is called a plague. But let’s not dwell on that, shall we? 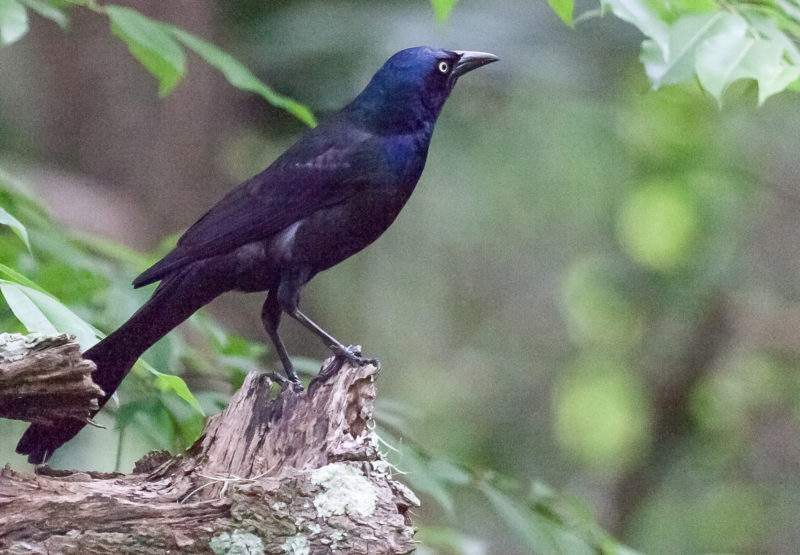 Interesting Behaviors of the Common Grackle

Common grackles likely get a bad rap simply because they’re not the solitary, elusive types. Sociable to a fault, they roost and migrate in huge numbers, and their colonies of nests can be counted in the hundreds. Nor are they the exclusive types. It’s not uncommon to find other blackbird species, including European starlings, red-winged blackbirds and cowbirds in their midst and migrating with them. Observing a massive flock as it fills and darkens the length of the sky is a jaw-dropping, amazing sight.

At any rate, their intensely social nature appears to serve them well. Only about half of grackles born make it to adulthood, but those who do have a life expectancy of up to 22 years in the wild.

Common grackles are even more interesting on solid ground, particularly during mating season when the big singles parties commence. They typically arrive at their breeding areas from mid-February to mid-March, a bit later in the northernmost stretches of their territory. Males and females along with territorial males will ruffle their feathers and stand up on their tiptoes making odd squeaking sounds that are often compared to the sound made from opening and closing a rusty gate. They’ll also engage in the practice of “bill-tilting” where they take a posture tilting their heads and bills upward as a demonstration of dominance. Often several courting males will surround a single female and show off in such fashion for a period of time until all but one drops away.

Yeah, it’s weird. But this strange courtship behavior apparently works out well for them.

Common grackles are abundant with a range that extends nearly all of eastern North America east of the Rocky Mountains and far north into Canada. Highly adaptable, they have adjusted to deforestation settling into urban and suburban areas, including parks, orchards and fields.

For the most part monogamous, once a pair has been established, the female will build a large, cup-like nest of twigs, grass and mud, preferably in dense conifers. She’ll typically lay four to five pale blue and brown-blotched eggs incubating them for about two weeks. Once born, both male and female will feed their hatchlings a steady diet of insects until they are ready to leave the nest at around 20 days.

As the common grackle grows, this black bird with a blue head will add more variety to its diet, including berries, minnows, frogs, lizards, eggs and even small rodents. A hard keel on the inside of their upper mandible allows them to saw apart acorns. An aggressive bird, the common grackle is even known to attack and eat the nestlings of other birds and can grab a live bat for a meal in mid-flight.

In bird society, you don’t mess with the common grackle.

One Cool Thing About the Common Grackle

You may see the grackle as just an ordinary black bird with a blue head, but that bird’s head along with its beak and neck contains a magnetic mineral called magnetite that enables it to use the earth’s geomagnetic fields to navigate flight. Pretty cool, huh?

The common grackle does this very weird thing called “anting” whereby it hunches over on the ground, wings spread wide and allows ants to crawl all over its body and feathers. Ewwww! But there’s good reason for it. The ants secrete someting called formic acid that helps destroy parasites on grackles. Now that’s what you call teamwork!