There is no denying that a blue jay is one of the most beautiful and colorful birds out there. Their striking blue color makes them easily distinguishable from other birds. Unfortunately, while most people enjoy coloring their homes by keeping blue jays in their backyards, some people despise the birds by calling them bullies. They may even want to discourage a blue jay from building a nest. In this article we’re taking a closer look at the blue jay’s nesting habits, and learning a little more about this extraordinary bird.

Whatever side you’re on, that doesn’t change the fact that this bird is still one of the most sought after by birdkeepers and will continue to be so for a very long time. The blue jay is popular among birdkeepers for its fair and smooth noise calls.

What makes blue jays stand out from most birds is that they are very intelligent and exist in strong family units.

Most blue jays out there measure about 9-12 inches in length, have a wingspan measuring around 13.4 -16.9 inches, and commonly weigh between 70-100g. Blue jays are often characterized by their grayish-blue crown and chest, bright blue wings and tails, and black bands.

If you’re looking to spot blue jays and do not want to confuse them with other birds, bear in mind that they have a unique necklace of black feathers around their throats which goes around their heads. These birds are easily spotted across the deciduous forests east of the Rockies.

Also, it’s important to note that the upper part bodies of blue jays are often bluish-gray, and they are brightest around their rumps. The lower belly and breasts of blue jays are white, while their eyes and feet are black.

While you might think that their appearance is already fascinating enough, blue jays also have some of the most interesting nesting habits you can find in any bird.

Here is a breakdown of some of the most common nesting habits and practices among the blue jays; 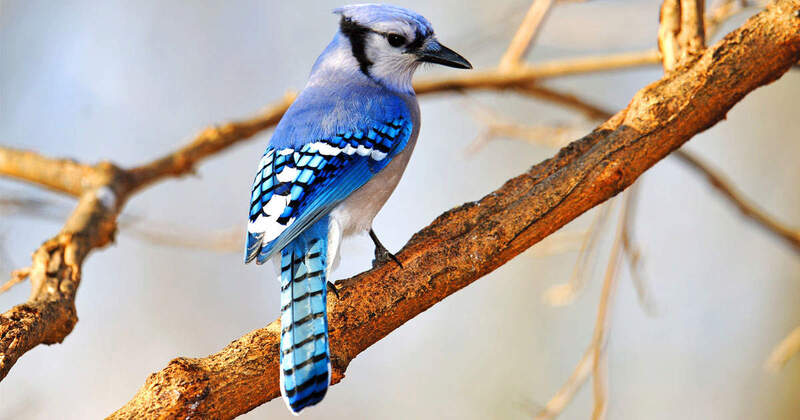 A blue jay nest is commonly spotted around the mixed woods and the deciduous forests in most of the eastern regions of North America.

The common residing range for these birds is between Newfoundland, across Alberta in Canada to Florida, and the eastern parts of Texas in the United States. In the United States, a blue jay nest is easily spotted among the pine woods.

In the Canadian regions, a blue jay nest is mostly seen among the fir trees, more so those with clearings. Also, it’s not unusual to find a blue jay habitat in suburban locations or even city parks.

Although blue jays have the character trait of being particularly noisy birds, they are oddly quiet when inside their nests. Blue jays build their bests at heights between 8-30 feet, depending on the surroundings.

These birds use sticks, twigs, leaves, grass, barks, and even roots to build their nests. The blue jays are known to fly great distances, searching for rootlets from fresh graves, fallen trees, or recently dug ditches.

After the female has accepted the particular male as their mate, it’s common for the two birds to fly together in search of their new home; somewhere they’ll build their nest. The new habitat could be an evergreen, a hardwood tree, a windowsill, or even a power pole.

One of the unique things about a blue jay nest is that it often contains a white material in its outer parts. For the blue jays around human settlement and activities, this can either be a light-colored leaf or a tree bark.

However, for those blue jays in the urban areas, this material can be anything from candy wrappers, paper towels, pieces of cloth, or even ordinary pieces of paper.

It’s common among blue jays for the females to remain behind in their nests while the male goes out hunting. Whenever a blue jay detects a predator around their nest, they’re likely to abandon it without a fight. 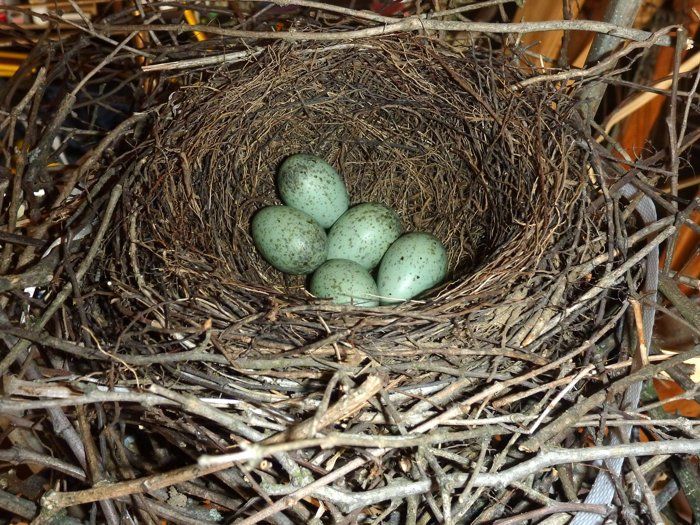 The female blue jay lays three to seven eggs, often blue, greenish buff, or yellow. The incubation process among most blue jays lasts around 18 days, with the female bird doing most of the incubation.

Although the male blue jay might substitute and do the incubation, it’s not a common occurrence. During the incubation process, the male’s main task is to bring the female food as she sits on the eggs.

Whenever the male steps in to incubate, the female will step out to get some fresh air and a bath. Blue jays can produce 1-2 broods each season, depending on the prevailing weather conditions. For the first 8-12 days after hatching, the female is responsible for the brooding while the male continues bringing in food. 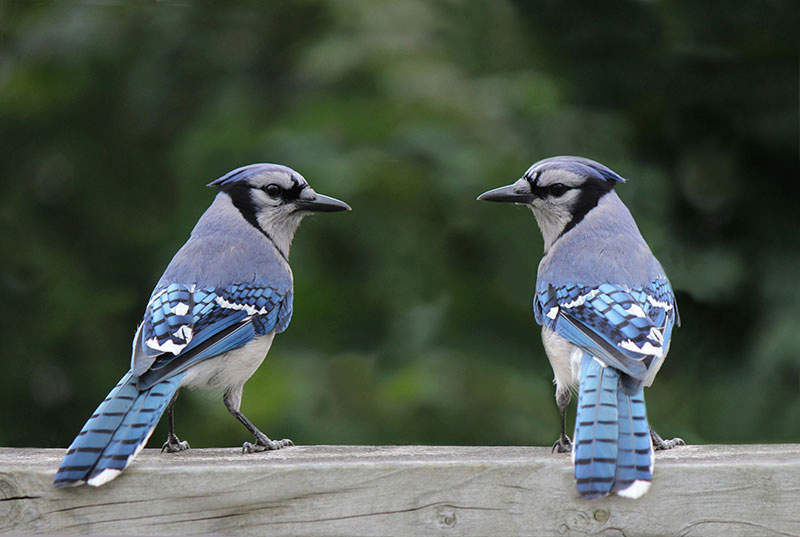 Mating rituals and tidbits among the blue jays

Unlike most songbirds, blue jays happen to be very loyal to their mates and end up forming long-lasting bonds. These bonds can survive for as long as the two are alive. When one dies, the other wanders off in search of a new mate.

Courtship among most blue jays starts around May of every year. The most common courtship behavior among blue jays is to have around seven males and one female on a tree, and whenever she flies, the males will follow.

This repeatedly happens in multiple locations while the male blue jays keep showing off to the female by nodding their heads. Eventually, the female will choose her mate, and they will fly away to begin their nesting phase.

The nodding behavior isn’t just typical during mating alone; it’s also evident during fights. When a blue jay submits, it will crouch down and fluff its feathers while in a ‘body fluff’ position. After the female has chosen the male blue jay, the latter strengthens their bond by regularly providing food.

This practice is crucial in the mating stage since it also shows whether the male can take care of young ones in the future. One unique trait among blue jays is that they start mating when they are only a year old or even younger.

This is seen as a good sign among birdkeepers because blue jays have a relatively short lifespan compared to other songbirds. However, the oldest blue jay lived for 26 years and 11 months. It’s important to note that blue jays have a high mortality rate in their first year; if they survive this, their chance of living even more years increases. 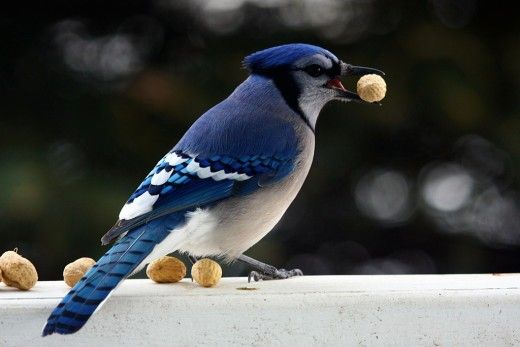 The blue jays’ diets during the winter consist of manly vegetables such as seeds, beechnuts, and berries. However, if you’re looking to attract blue jays into your birdfeeders, the best food to use is peanuts.

Ensure that these peanuts are in a shell for the birds to take even longer to go through them as you craft better ways to keep them inside the birdfeeders.

Also, if you’re looking to keep other birds or rodents from feeding on the peanuts you have kept for the blue jays, ensure you cover them with a peanut feeder. Blue jays are also major vegetarians meaning that you can also attract them to your birdfeeder using sunflower seeds.

The unique part about blue jays eating nuts is that they hold them with their feet and use their bill to crack them. You have to admit, for a medium-sized bird like a blue jay; this is very impressive.

Blue jays are particularly naughty when it comes to their feeding preferences. This is because they can steal food or eggs from other birds and take advantage of whatever food resource is available to them.

Blue jays even go as far as storing acorns in the tree barks and soil. During the summer, you can easily spot blue jays flying in huge flocks in search of food. This gets particularly frightening for other songbirds that end up leaving their feeding areas for them.

Also, even the predators stay away from blue jays during this period since most of the time, they can be heard imitating the call of Red-shouldered and Red-tailed hawks.

Bluebirds are exceptionally good when it comes to defending their territories, as there have been cases of them chasing raccoons, hawks, snakes, squirrels, and even humans who dare come close to their nests.

How blue jays feed their young ones

After hatching, the hatchlings tend to stay in the nests for about 17 to 21 days. During this period, both the male and the female take turns in feeding them. However, the male blue jay does more of the feeding as the female stays back to watch over the hatchlings.

It is at this period when most people will stumble upon an abandoned blue jay. If this bird can be restored to the nest, the parents will continue feeding it. 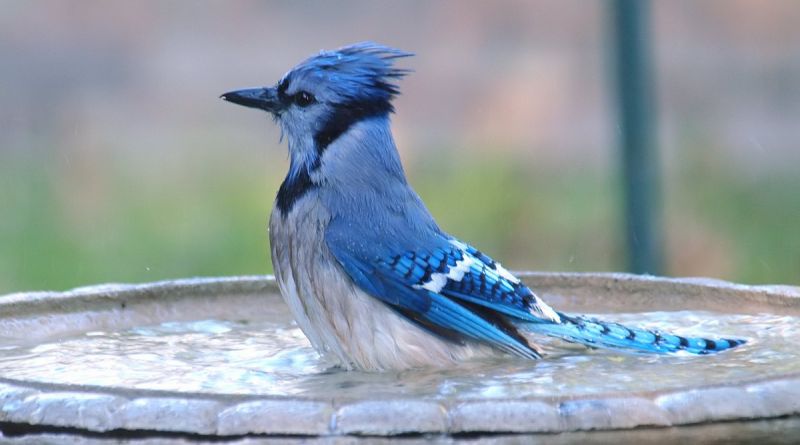 Some interesting facts about blue jays

Blue jays are beautiful birds to keep at your birdhouse, but it will be a great experience for you if you’re patient enough. If you take your time to feed and take care of them without minding the noise and constant eating, they can provide a colorful outlook to your home.