We often see raptors such as Cooper’s hawks soaring high in the sky or perched on a tall branch ready to snag some prey. However, it’s much less common to see them nesting. In this article we take aim at how this North American hawk creates a welcoming environment for its offspring. Let’s talk about Cooper’s hawk nesting habits.

Picking the Right Location for the Nest

Whereas many species of birds of prey keep their distance from places we humans tend to be, Cooper’s hawks have adapted to a variety of environments. Suburban settings including parks, cemeteries and even quiet wooded streets can serve as attractive nesting areas. They often choose moderately wooded or mixed wooded/open areas in which to build their nest. Like their accipiter cousins, the sharp-shinned hawk and northern goshawk, Cooper’s hawks gravitate towards woodlands that offer a mixture of deciduous and coniferous trees. They prefer to be near a bit of open space and some water because that is where their prey is likely to be, and they will need to feed their new family soon.

A Coopers hawk nest is usually arranged in a medium-to-large deciduous tree, but sometimes evergreens are used. Like most larger birds, they build on a large branch at the crotch of the main trunk in order to support the weight of the nest. These hawks like to build their nests at least 20 feet off the ground, and preferably about one-half to two-thirds up the tree or 30-60 feet from the ground. By choosing this height range, the hawks provide protection for the nest from predators both above (such as owls or larger hawks) and below (such as raccoons or nosey humans).

One of the Cooper’s hawk nesting habits that is interesting is that they choose to build where there is an existing nest: either an old nest of their own or one previously used by other birds or squirrels. Although a mating pair does not often re-use the same nest (or same breeding partner!) year after year, they do generally keep to the same neighborhood for each brood they raise. 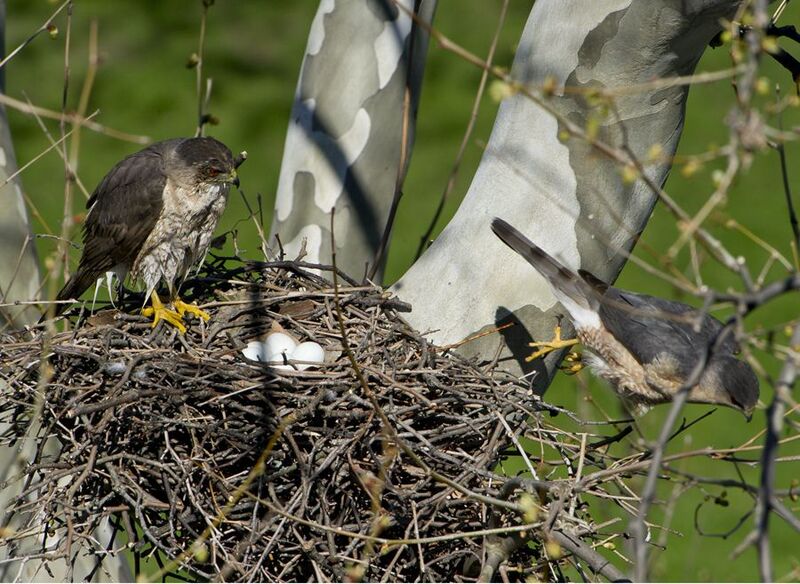 In early spring, the hawks build or re-build the nest for this year’s brood. A Coopers hawk nest is made of twigs and sticks about 1-3 feet in length. As is the case for most raptors, instead of foraging for sticks on the ground, these hawks will break dead twigs directly off trees to use as building material. They do this by either flying to a twig and grabbing it with their talons in midair, or they stand on a bigger branch and break the desired stick off with their beaks.

The mating pair works together to construct a nest that is 24-28 inches in diameter and anywhere from 6 to 18 inches high. The cup-like interior measures roughly eight inches wide and four inches deep, so there is just enough room for the female and her eggs. The inside of the nest is lined with flakes of bark, which is also harvested directly from trees. Sometimes the hawks will add greenery to the nest; this is thought to provide the young with some protection from insects and parasites. 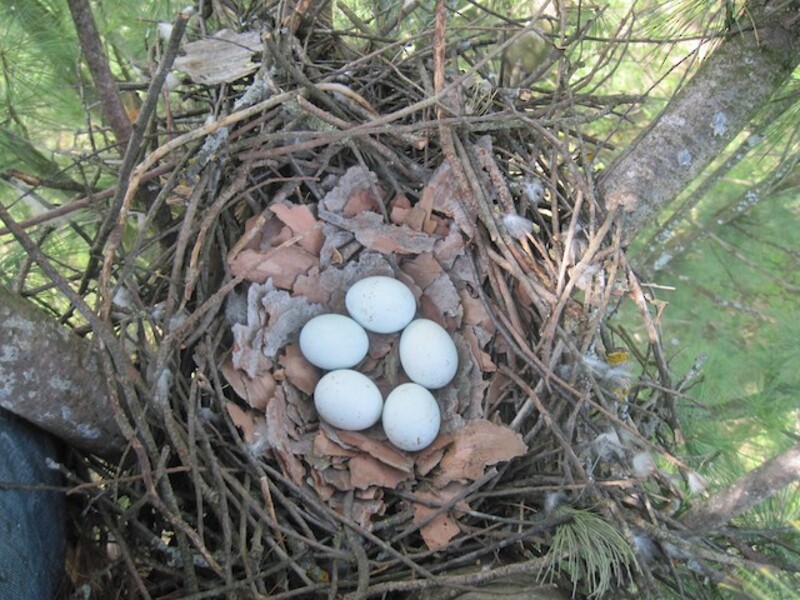 Next, Add Eggs and Heat

Like most raptors, Cooper’s hawks normally breed only once per year. The female lays her eggs sometime between mid-March and late May, depending on the region. She produces a clutch of two to six eggs, but usually four or five; this is quite an energy-intensive process, so she needs a lot of nourishment. The male does the hunting during this period, bringing back small or medium birds or the occasional rodent.

The female incubates the eggs for 30-36 days, fluffing her feathers while brooding to achieve maximum heat retention. The male attends to the clutch to give the female time to eat, so that the eggs are kept warm the entire incubation period. She is very dedicated – feeding is the only time the female leaves her clutch. She will occasionally rotate the eggs to ensure that each egg gets its turn at prime warmth.

Although generally the breeding pair will be monogamous for the season, in some cases the female will entertain other males while she is laying eggs and her primary partner is off hunting. Let’s just say she is easily wooed by a guy bringing here a nice fat bird to munch on – that mama is hungry! The result can be a nest containing half siblings; the more the merrier?

Cooper’s hawk eggs are roughly the same size and shape as medium chicken eggs – about 2 inches tall and 1.5 inches wide. The shells range in color from pale blue or bluish-white to creamy white, and they may have light brown speckles.

Assuming the month-long incubation has gone well, the chicks will begin to break out of their shells using all of their strength and their egg tooth. The young hatchlings emerge from their shells looking like little white furballs, covered with down. As with the other members of the genus Accipiter, Cooper’s hawk chicks have their big grey/black eyes open when they hatch. Even with eyes open, they are still pretty helpless at this point. The female remains in the nest with her brood of chicks for at least two weeks to keep them warm.

Lots of Mouths to Feed

Meanwhile, the male continues to hunt for prey to feed his new family, picking up a bird, small mammal or reptile for dinner. Although almost any small-to-medium sized bird will do, California Cooper’s hawks prefer mourning doves, quail and robins; perhaps this is because these victims spend a lot of time on the ground. In other regions, blue jays, grackles, and starlings are often on the menu. Among mammals, young rabbits and small squirrels are popular meals for the brood.

Once the male has delivered the catch, the female prepares the nestlings’ meal by using her talons and beak to tear the meat into small pieces. The chicks jockey for position to get as much nourishment as they can – it’s sibling rivalry at its best – or worst!

After about two weeks, the nestlings are strong enough to move around in the nest and cry out for food, and their feathers begin to appear; they no longer need to be brooded, so the female can leave the nest for a bit. Both parents are fiercely protective of their young and will swoop and dive on any man or beast that seems to pose a threat!

Time to Grow Up

At about three weeks post hatching, the chicks are stretching their wings and may start hopping out to a nearby branch. By 4-5 weeks they are fully feathered and ready to fly short distances. Even after fledging, the "branchers" will stay close to the nest to continue to learn to fly, hunt, land and kill like a grown-up raptor. Eventually, the juveniles move further away from home to find their own territories and mates.

Unfortunately, not all chicks live long enough to fledge the nest; some get snagged by a raccoon or other predator, or they are just too small or weak to compete for food. The average number of full fledglings per brood is about three.

Occasionally, due to predation, disease or damage to the tree, an entire clutch of eggs will be lost. If either the male or female succumbs, it is likely that the whole clutch will not survive. However, if it is early enough in the season, the female may "re-clutch" or lay another set of eggs.

Cooper’s hawk nesting habits are commonly overlooked because they are a bird of prey, and we are generally only exposed to them when they are in hunting mode. You might see a hawk patrolling the day sky as it eyes it’s next meal, but it’s rare to see it at home tending to the chicks. But it’s important to remember that these hawks are just like any other bird. They have to have a home, just like you and I!