In order for fertilized eggs to mature and hatch they need to maintain a consistent temperature of around 100 degrees. Fertilized eggs also need to be turned regularly so that heat is distributed evenly and to help ensure that embryonic membranes do not stick to the inside of the shell. This is true for nearly all birds, and it is also true for quail. Like most birds, quail sit on their eggs to incubate them.

During the breeding season, females will lose their feathers on a patch of skin on their underbelly. This is called a brood patch, and it contains a natural internal regulator which enables them to more easily transfer body heat to their eggs. As the baby birds develop inside the eggs, they also create heat. This regulator also sends a message to the mother bird about how long she should sit on the eggs at any given time and when she should take a brief leave. As the incubation period progresses, the amount of sitting will need to naturally diminish and that regulator keeps her informed how much and how often to adjust her behavior. So while the mother quail sit on their eggs for large lengths of time in the beginning period of incubation, in the latter stages, they can spend more time away from the nest.

Interestingly, it has been found that many wild male mountain quail also develop brood patches and will at times help their mates with incubation. This is particularly the case if the mother bird has been killed. A California study found that most quail broods are raised by a single adult bird, but that those raised by two adults tend to be larger in size. 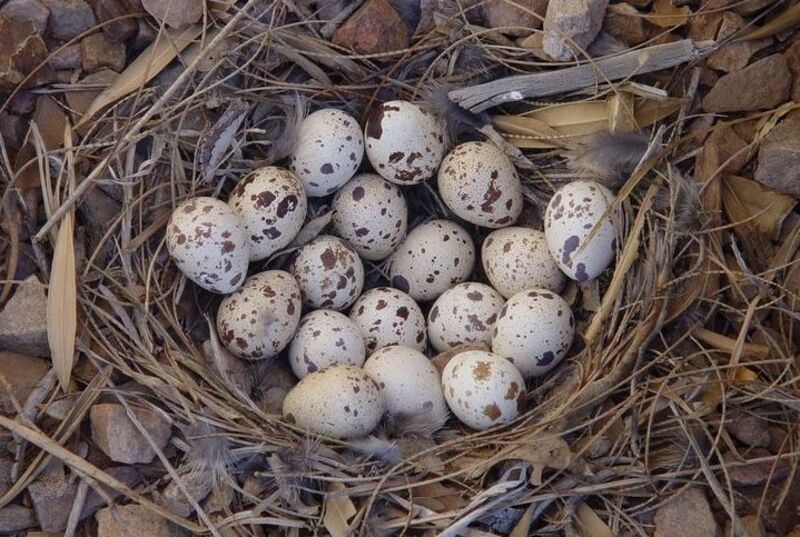 How Many Eggs Do Quail Lay?

There are about 130 different species of quail and the number of eggs in each clutch depends on the individual species. On average, quail species lay five to fifteen eggs in each clutch. One egg is laid each day after which the mother quail will leave the nest. She will return each day to lay another egg until her clutch is complete.

Some nests have been found to have as many as 28 eggs, but it is not uncommon for two females to share a nest or for one to lay eggs in another nest in addition to her own. This latter behavior is known as “egg dumping.”

During this time, without the heat from her body, the eggs she lays remain dormant with no development taking place. Only after her last egg is laid will she stay in the nest to begin incubating. This helps ensure that her entire brood will hatch at the same time. Once started, the incubation period lasts on average about 21 to 31 days depending on the species. The incubation period for chickens, in comparison, is about 21 days.

Quail tend to have one to two broods per season, with the first hatch arriving in late June.

Where Do Quail Make Their Nests?

Most quail species make their nests on the ground under dense cover, scratching out depressions under tall grasses, up against rocks, or under scrub brush. Nests tend to be about 1-1/2 inches deep and 5 to 7 inches in diameter. Their eggs are typically 1-1/2 inches long and 1″ wide, light brown or creamy tan with assorted speckles and spots. 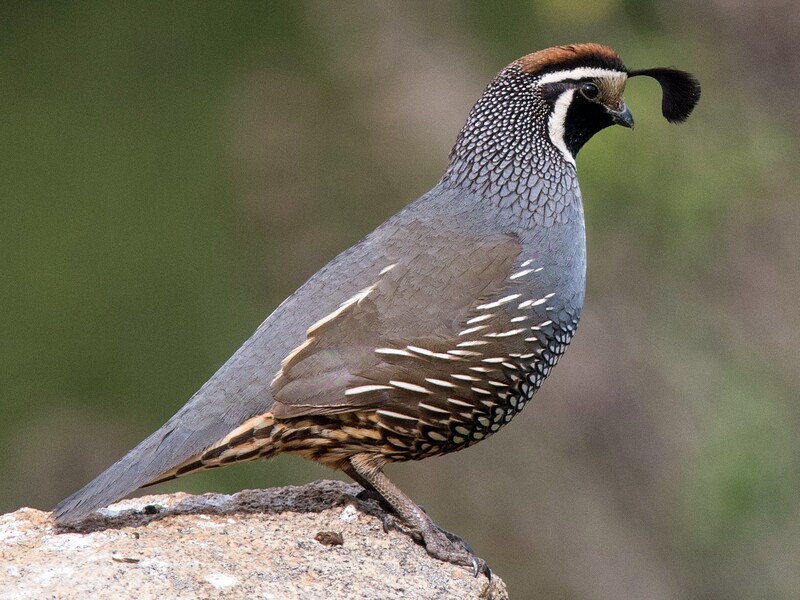 How Do Quail Protect Their Eggs from Predators?

Quail have many predators including fox, opossum, raccoons, hawks, owls, and snakes. They are also popular game birds for human hunters. Therefore, no matter how much they try to hide under dense cover, they still face a high mortality rate. The fact that they regularly produce large clutches is an evolutionary response to that imbalance.

A 2012 study led by vision scientist George Lovell at the universities of St. Andrews and Abertay in Scotland, however, found that quail make an even greater effort to protect their unborn young. The scientists observed that the quail they raised in controlled environments appeared to produce eggs distinctly different from one another. Whereas one female might produce eggs with consistently large dark splotches, another would produce lightly flecked eggs. They wondered if the birds would make choices where to lay their eggs based on the appearance of their eggs.

In the study, the scientists purchased various colored sands from an aquarium and set them on trays in the aviary enclosures. They observed that in most cases, the females chose to lay their eggs on sands that best camouflaged them. This practice, known in the wild as disruptive coloration, enables birds to protect their eggs by disrupting their visual outline.

How Do Quail Develop During Incubation?

There are two types of baby birds–altricial and precocial. Altricial chicks are typically born with closed eyes and without feathers and are much more dependent on their parents for sustenance in their early days. However, after birth, their development ramps up quickly.

Quail chicks, like ducks, shorebirds, geese, pheasants, grouse, and others, are of the precocial type. These hatchlings are born with a downy coat of feathers, their eyes open and readily able to feed themselves. They can run around in a matter of hours after their birth and are ready to leave the nest in days. Unlike altricial birds, however, their development slows substantially after hatching.

While the incubation of each quail clutch is synchronized so that each chick hatches at about the same time, the mother Gambel quail leaves nothing to chance. Just before her eggs are about to hatch, she calls out to her chicks still inside their shells, and they, in turn, cheap back to her and to each other. This chatter appears to be a general agreement that hatching may begin. Each chick then pecks a neat hole in their individual shells leaving a small piece of membrane that acts like a hinge so they can open their doors and step out.

So not only do quail sit on their eggs to keep them warm, they more or less command their chicks to hatch when the time has come. Welcome to the world baby chicks!