Yes, robins do travel in flocks. For robins, more pairs of eyes mean being able to spot predators and food much more quickly. They do keep their flocks loose in order to give each other plenty of space. When robins gather in flocks, they almost always roam into areas that are very spacey. They stay close but space out between suburban yards and countryside acres. 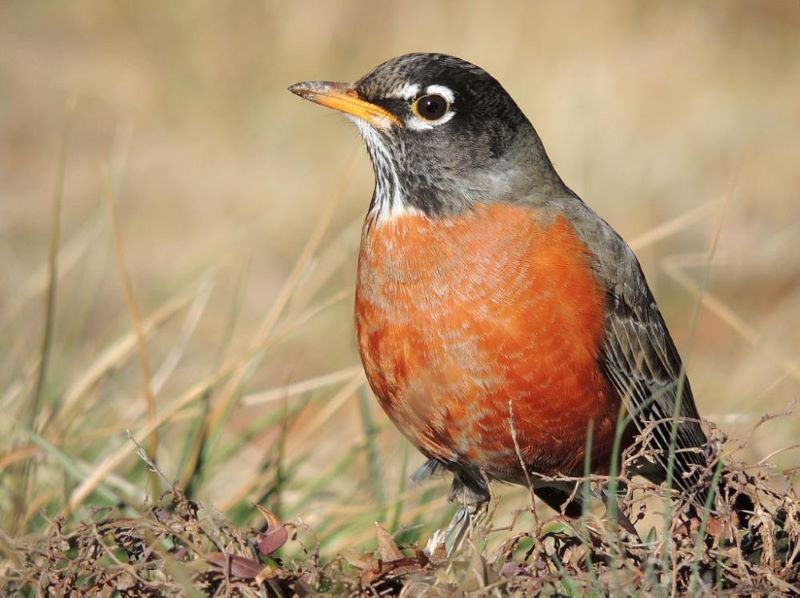 They can fly up to 36 miles per hour and cover up to 200 miles a day. Their diet, which consists of earthworms, insects, berries, etc. usually becomes available at 37 degrees Fahrenheit.

The males usually return first because they have the major job of spotting a good territory with plenty of nesting materials. If an unexpected snowstorm dampens his food supply for a few days, he can easily wait it out until the next thaw. The female, however, can really weaken herself if she tries to do the same thing. If she does, it’s difficult for her body to produce eggs and her nest won’t be as strong.

The males and females have the same general coloring as the females only the males are much more vivid. Their chest area is bright orange, their heads and tail feathers are pitch black. That makes them very easy to spot anywhere.

It’s Tough Out There

Unfortunately, not all robins survive migration. Only about 25 percent of their babies make it to adulthood and then many more young adult birds die during migration.

The way that their flocks get started in the first place is that once the female lays and starts the incubation process with the next set of eggs, the father takes over the older flock. Along with other male robins and their current older flock, he leads them to a common area under a shrub or in a tree to sleep. Then once the third set of eggs are laid and incubated, the male then leaves the first flock to care for the second set. The first flock are usually okay to be on their own by this time and just hang out with other young adult birds.

Robins are mostly diurnal so they do most of their migration during the day. However, they are known to do so at night if the situation is just right for it.

The main reason that they migrate is because they’re locked out of their main food sources when the ground and vegetation start to freeze. They usually switch to fruits and berries as a result but most northern states don’t usually have enough for them to survive on. Then they migrate back up north during the warmer times because the heat is very stressful on their bodies. Plus one main source of their food, earthworms, burrow themselves even further when the ground dries up.

However, one factor that seems to be contributing to a change in their migration patterns is climate change. It doesn’t seem to be changing the answer to the question, do robins travel in flocks? However, it’s no longer unusual for them to stay as far north as Minnesota especially if the winter temperatures are mild enough. However, they can withstand even extreme cold temperatures if enough food is around.

Biologists and birders are also concerned about the birds getting confused and being led into an inadvertent death trap. As a result, biologists along with bird watchers and the University of Minnesota’s Department of Wildlife have been planting fruit-producing trees, shrubs and vines since the mid-1990’s.

One thing that robins do when they arrive on territory is sing. This is usually to greet other flocks when they arrive. At the end of winter, however, it means that their hormones have started to surge at the start of breeding season. 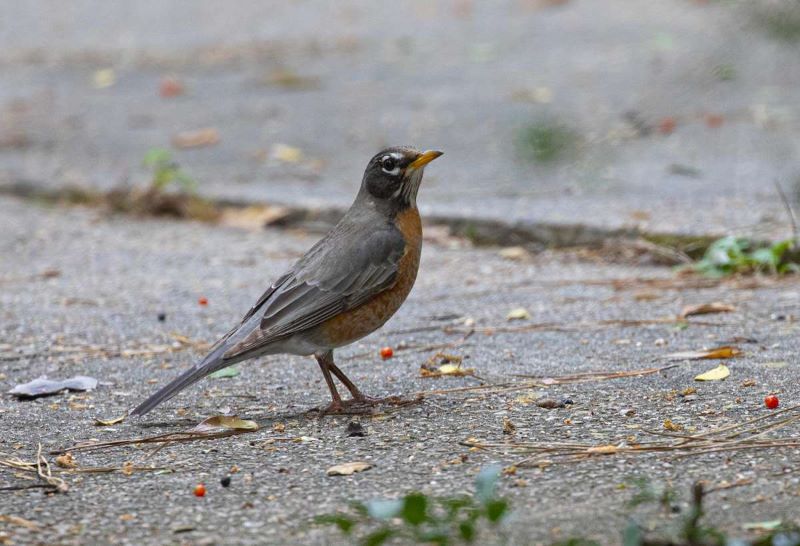 How Far Do They Migrate?

Robins can migrate in either long or short distances depending on where their food is the most available. Sometimes they stay in one place for at least one full year if their food remains plentiful.

However, even if they do decide to stay during the winter, most people living in suburban areas won’t see them. This is because most suburban backyards don’t have fruit-producing vegetation that thrives in the winter. However, if there’s a rural area close by that does, chances are, they’ll go ahead and stay. However, the flocks may decide to break up, go ahead and forage alone when there aren’t a lot of daylight hours.

So the lone robin in the backyard being a sign that spring is either near or here, I’m sorry to say, is just a myth.

Robins have been known to flock in groups of anywhere between the hundreds to the millions in any one area. It simply depends on how many flocks have forged a relationship with each other and through their fathers.

Did you enjoy reading this article about how robins travel in flocks? Here’s some more fun articles for you to explore: