This gregarious species can be found all over the Americas, Europe, Asia, and Africa, but for residents of Ohio, finches make a delightful bird to watch. Finches in Ohio are easily characterized by their small bodies and sharp beaks, which are just the right shape for prying open shells to get to their favorite seeds. Finches appear in a variety of different colors, which happens to be a helpful identifying factor to determine which species of finch you’re watching.

Ohio is a central, northeastern state where you’ll find a dry, humid climate with hot summers and very cold winters. The nine different species of finch you’ll find in Ohio are:

Finches are a common favorite bird to spot in Ohio. They have small, beautiful bodies, and lovely songs to listen to, especially during the mating process. Our guide will help you learn to identify the species you can find in the state of Ohio. 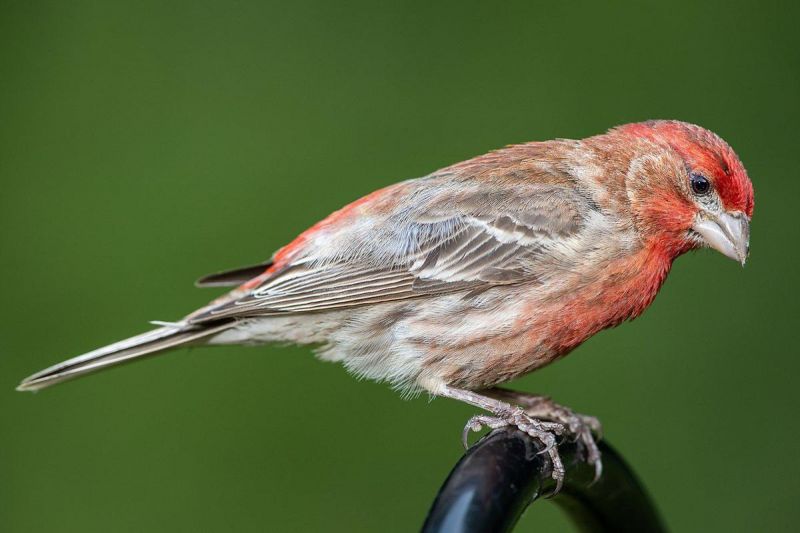 House Finches are very small birds, weighing between 16 and 27 grams and with a very short wingspan of 20-25cm. Male House Finches have a muted cherry-colored plumage around the face and upper breast. Their backs, bellies, and tails are a streaky brown. When male House Finches are in flight, their red plumage is distinct. Males in particular can look different from each other, largely in part to their diet. Adult females have no red feathers on their bodies. Instead, they are grayish-brown with a dark, streaky brown back and tail feathers.

House finches prefer to form very large flocks with about 100 birds to fly and forage together. Finches are very social, even when mating season has ended. They’ll collect together at feeders or perch together high in trees.

Black oil sunflower seeds are one of the House Finch’s favorite seeds, and they use both hanging and stationary feeders. A little wind does not keep them away from a hanging feeder with black oil sunflower seeds! It’s a treat to watch them rapidly crush seed shells in their bill and pry out the seeds to eat.

House Finches in Ohio are permanent residents, and you can see them anywhere in the state. They are easy to spot in parks, backyards, forest edges, and more. 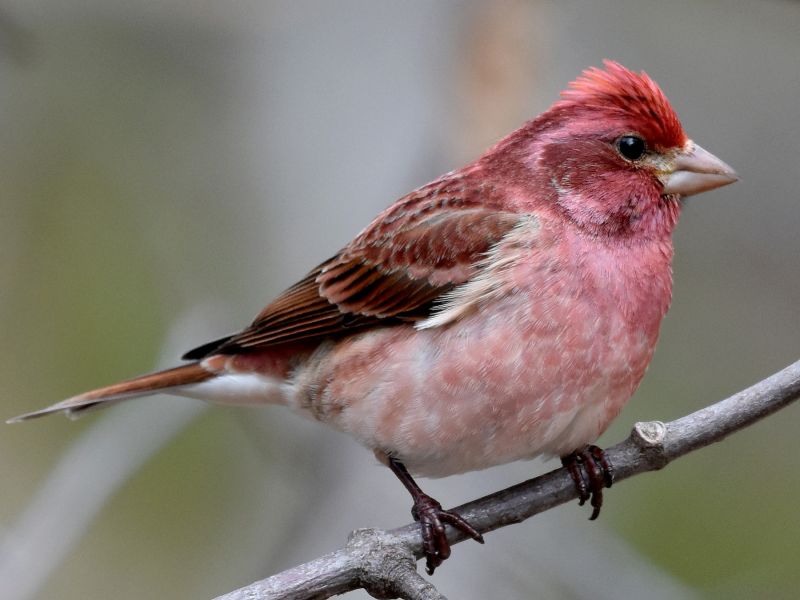 Purple Finches are slightly smaller than House Finches, with a weight range of 18-32g and a wingspan that ranges from 22-26cm. Male Purple Finches have a raspberry-colored head and look as if their body has been streaked through by raspberry juice. Female purple finches do not have the raspberry-looking coloring. Instead, they are streaked through by whites and shades of brown.

Purple Finches may put on a show for you. While they do not act violently, they are known to show displays of aggression, especially over their source of food. Females tend to come out the victor in these aggressive displays. Purple Finches are also fond of black oil sunflower seeds, but they can enjoy safflower seeds and nectar and flower buds. If you want to attract them to your yard, you’ll need a feeder with a platform.

Of the Purple Finches, it’s the female who builds the nest and the male who flies about, guarding and providing protection from predators. Purple Finches can be seen anywhere in Ohio, but not usually during their breeding season. 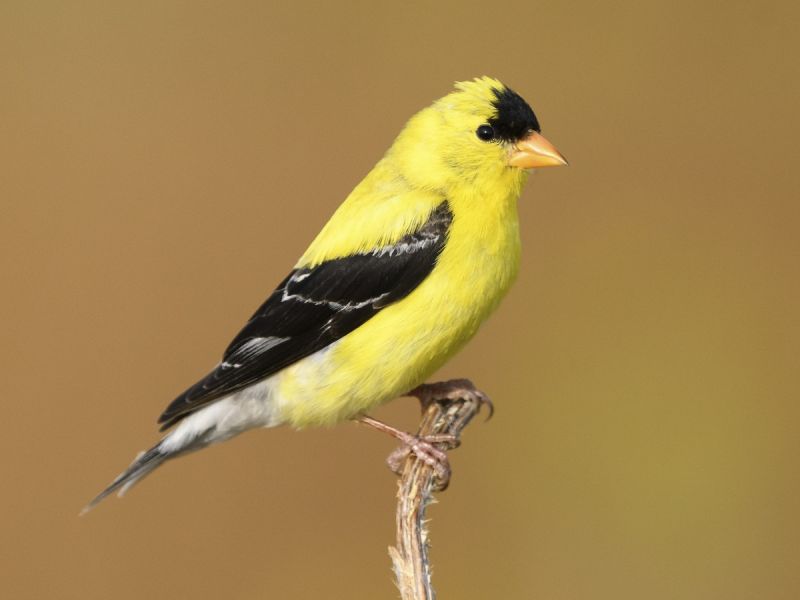 This beautiful, sunshine-yellow species is the smallest of the finches we have looked at so far. The American Goldfinch weighs only 11-20g, with a wingspan of 19-22cm. During the breeding season, males are bright yellow with black wings. In winter, these bright yellow feathers become browner in color. Female American Goldfinches have dull yellow feathers. These traits are known as sexual dimorphism and seasonal dimorphism.

It’s common to see American Goldfinches in your garden. Listen for the perchickory call and watch for its bright feathers flashing in the sun. They like roadsides, open woods, and patches of weeds, and they can be found almost all season in open and semi-open areas. The American Goldfinch searches for its food in trees, shrubs, and even in weeds. They forage in a flock except during breeding season. Their favorite seed is the nyjer seed, but they like a variety, so be sure to fill your feeders with different types of seeds.

During breeding season, the courting pair of American Goldfinches will fly around to find a nesting spot together. Then the female will build the nest, while the male flies around defending the female from predators and other males. Unfortunately, breeding season (July and August) is the only time of year you won’t normally find American Goldfinches in Ohio, so you may not get to see one of their nests. 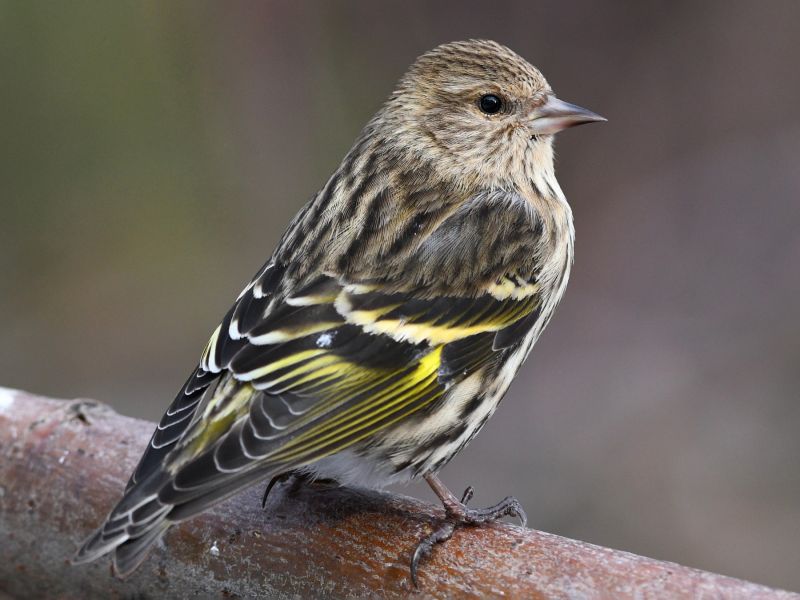 Pine Siskins look very much like sparrows. They are about the same size as the American goldfinch, 12-18g with a wingspan of 18-22cm. This species is recognizable by its feathers streaked through with browns and its tiny bill. Pine Siskins tend to stay in a colony even through breeding season. Male Pine Siskins will try to court a female by singing his unique mating song, while he flies with his wings and tail spread out. The male Pine Siskin is known to feed the female during their courtship. Their nest resembles a shallow cup and is made of twigs, animal hair, feathers, and more.

The Pine Siskin nests in the woods but then moves to semi-open areas, where they can twitter about in flocks. They enjoy fields of wild sunflowers, where they can find lots of seeds. The Pine Siskin’s diet consists of seeds and small insects, like aphids. This species also tends to behave aggressively around its food source, especially in the winter months when it is scarce.

Because of this, you are most likely to see the Pine Siskin visit your garden in the color months, so keep your feeders stocked with pine and other seeds. Pine Siskins are erratically migratory, but they travel to much of Ohio in large numbers in the winter. 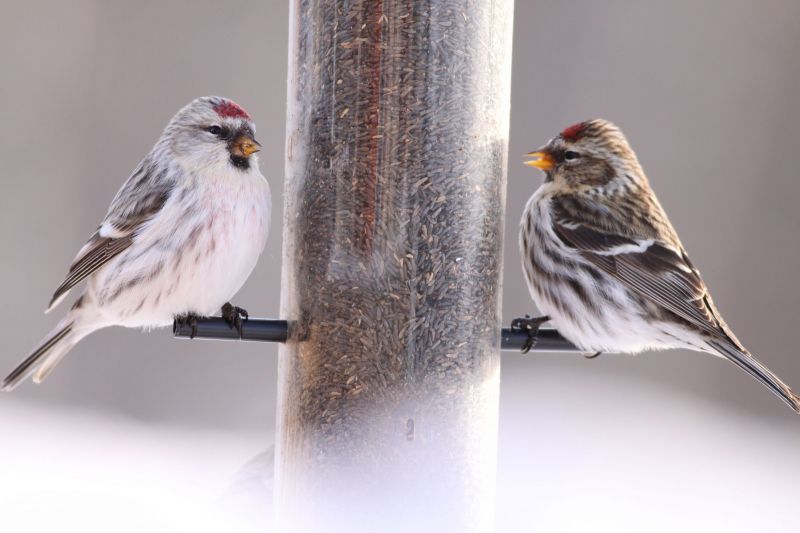 The Hoary Redpoll is a species of finch that has a bit broader weight range. The adult Hoary Redpoll can weigh between 11-20g. This species is easy to identify by its mostly white and gray feathered body. It can have a somewhat yellowish tint on its face, and the male Hoary Redpoll also has a small red patch on its head. Juveniles are streaked all over with brown and white. The Hoary Redpoll has a small, cone-shaped bill.

These males will sing to females during courtship, and then they feed any welcoming female to establish the courtship. Like many other finches in Ohio, the female will build the nest during their breeding season. The nest is woven of grass and resembles a cup. It seems this species of finch may be monogamous.

Hoary Redpolls are not as common as other finches in Ohio. They can only be found in the northern part of the state during the winter months. Hoary Redpolls are not very receptive to bird feeders, but if food is scarce enough during the winter, they may stop in your garden for a visit. They feed on a wide variety of seeds, but like nyjer seeds the best. Sometimes during summer they will even eat spiders and insects. 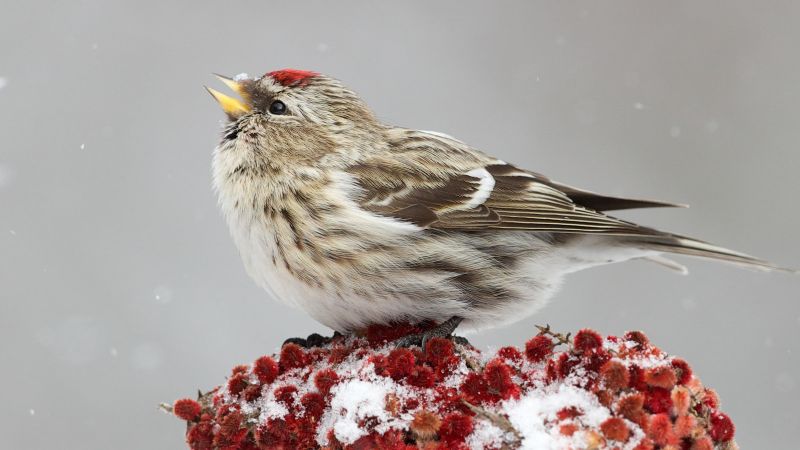 To court a female, male Common Redpoll will fly in slow circles and sing its mating call. The two interested Redpolls will peck each other’s bills, and then the male will sometimes feed the female. The female Common Redpoll chooses the site for the pair’s nest and builds it. She uses materials like twigs and grass.

The Common Redpoll can be found anywhere in the state of Ohio, but mostly during the winter months. Because of their tiny beaks, keep your feeders stocked with very small seeds, such as nyjer seeds. Listen for their energetic notes and chatter, and keep in mind that they travel in large flocks and seem always in motion. 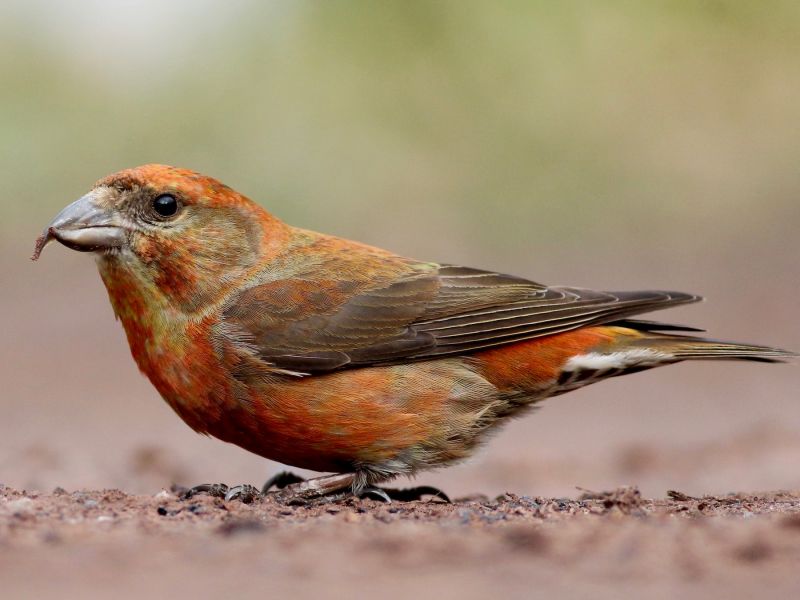 The Red Crossbill’s name describes its appearance quite well. The males of this species of finch are mostly a bright, fiery red-orange in color on the head, breast, and back with dark brown wings. The female Red Crossbill has bright yellow feathers where the male is red. Its gray bill is curved, with the top and bottom crossing over each other. The Red Crossbill has been seen in a variety of sizes and is still mostly unstudied, so a median weight range is unknown.

Red Crossbills can be seen in northern Ohio all throughout the year. In southern Ohio, they will only be found during the winter months. This species is not known to frequent many gardens, so it will be a fun and rare occasion if you happen to catch sight of one in your yard. The most likely time to see a Red Crossbill in your garden would be during the winter while food is difficult to find. Keep a seed feeder stocked with pine seeds to increase your chances. 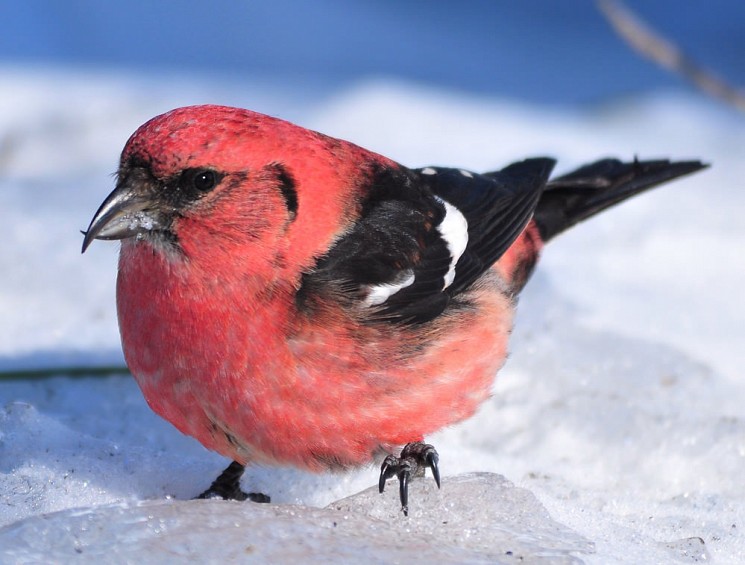 This species of finch is also named for its distinct appearance. Its peculiar, light gray bill also crosses over, and is perfect for opening spruce cones. The males are a light, almost pinkish red, with black wings that have unmistakable white tips on the edges. Females and immature males are a pale yellow in color, and the females do not have black wings.

Their white-tipped feathers are useful during courting. The males sometimes perch together to sing their mating songs. When a female White-Winged Crossbill is receptive to a male’s song, the male will feed her. Once they have eggs, the male White-Winged Crossbill is the one who takes care of the eggs and then raises the young. The female continues to mate with other males to increase the number of new birds in the species.

The White-Winged Crossbill is not necessarily a migratory bird, but they will travel long distances in order to find a good cone crop to feed on. These birds tend to forage in conifers in their flocks. You may be able to see a White-Winged Crossbill in southern Ohio in the winter. It’s unlikely, but if you keep a seed feeder well-stocked in the cold months, you may happen to see one in your garden. Their diet also consists of buds, berries, and insects.

Finches are a delightful bird to watch. Males put on a beautiful show, flitting about and showing a display of their feathers. They also are wonderful songbirds. Familiarize yourself with their different calls, because sometimes it is easier to hear them before you see them.