Do you like bird watching in your free time? Michigan is a great state for viewing birds alongside other types of wild animals. The state is located between Lake Erie and Lake Michigan, which makes its location the perfect spot for bird watching. Owls in particular are very common in the area. You may have noticed that there are different types of owls in Michigan — in this article, we’re taking a look at the specific species you can spot and their telltale features to help you differentiate between them.

This owl is one of the largest ones within Michigan. It is scientifically known as Bubo virginianus, and early naturalists referred to it as the tiger owl. The owl is native in America, especially North America, where it is believed that it was admired for its beauty, strength, and courage. They are around all year long, during summer, winter, fall, or spring.

You can easily recognize the great horned owl from its large yellow eyes, big ear tufts, and its overall large size. Its wingspan is between 39.8 inches and 57 inches. Did you know that a great horned owl is a hawk’s (red tailed) mortal enemy? Among all the owlet species, the horned owl is known as the major predator, especially against red-tailed hawks, goshawks, ravens, and Cooper’s hawks. The long-standing rivalry between the hawks and the owls is because hawks are notorious in attacking, killing, and eating young owls.

Due to its large size, the great horned owl is about 18 inches to 25 inches in length and weighs around 32.1 ounces to 88 ounces. Since the bird has a predatory nature, it is known as the only bird that hunts, kills, and eats skunks. The main habitats of the great horned owl are the open fields, swamps, forests, tropical rainforests, deserts, tundras, and parks and cities of suburban areas. The primary diet of the owl consists of:

The barred owl, scientifically known as Strix varia, is very common in Michigan. It is also known as the striped owl or the hoot owl. You may have spotted it several times. Especially if you like to take long forest walks. They have a very unique vocal call that almost sounds like human words. Some people believe that the owl’s voice sounds like this, "Who cooks for you all?"

The barred owl is between 16.9 inches and 19.7 inches in length, with a wingspan of between 39 inches and 43.3 inches. This owl is very light due to its weight of about 16.6 ounces to 37 ounces. The preferred habitat of the barred owl is matured forests as well as woodlands. Their main diet consists of small mammals, but the barred owl is an opportunistic predator by nature. This means that it preys on smaller vertebrates such as:

Another one of the common owls in Michigan is the barn owl, which is beautiful but very elusive. They are more visible in the Southern parts of Michigan near south of Detroit. However, you can still catch a glimpse of the bird in North Michigan.

Scientifically known as Tyto alba, the barn owl is between 12.6 inches and 15.8 inches in length. Due to its small size, it has a wingspan of about 39.4 inches to 49.2 inches. Its weight lies between 14.1 ounces and 24.7 ounces. How will you identify a barn owl? It has a heart shaped face with beautiful plumage.

The owl lives in manmade structures especially barns, hence its name. Barn owls are such special creatures because they are the most widely spread birds in the whole world. They have about 46 different subspecies all over the world, with the North American owl being the largest of them all. Like many other owls within Michigan, barn owls are nocturnal creatures and you can spot them at night hunting small mammals.

The owl has a peculiar trait of swallowing its prey whole with bones, skin, and all. The barn owl does not digest food normally through the digestive tract. Instead, it regurgitates pellets that its body does not require for nutrition.

Because of their exceptional hearing and ability to see clearly in dim lighting, barn owls are great nocturnal hunters feared by all their prey. A barn owl can track and capture its prey by sound only, making it the only animal that can do so.

Another one of the year round resident owls in Michigan is the Eastern screech owl. It is incredibly small in size with a length of between 6.3 inches and 9.8 inches. The wingspan of the owl is about 18.9 inches to 24 inches.

The scientific name of the Eastern screech owl is Megascops asio, and it is common in the Eastern part of North America particularly from Mexico to Canada. It is difficult to spot an eastern screech owl because they purposely avoid detection because of their nocturnal habits. This type of owl likes to feed on prey such as:

The male owl is slightly smaller than the female, and its main role (the male) is to hunt and bring food to the female Eastern screech owl and its young one. 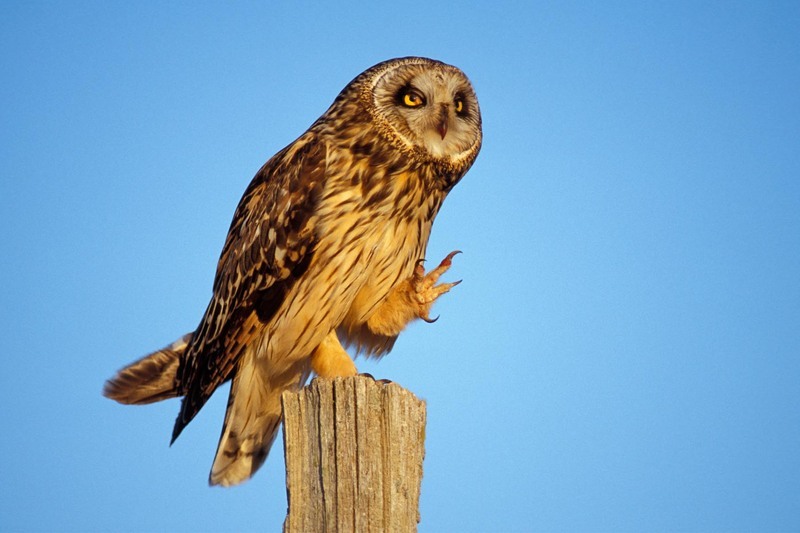 The preferred prey of the short-eared owl is rodents and mice, which are also active during the day, making it easy for the owl to prey on them. The owl also feeds on the following prey:

These owls can fly for long distances during migration. Their length is between 13.4 inches and 16.9 inches. The wingspan of the short-eared owl is between 33.5 inches and 40.5 inches, with a weight range of 7.3 ounces and 16.8 ounces.

The Saw-whet owl is the smallest owl in the state of Michigan and it can be found all year long. It is between 7.1 inches to 8.3 inches long with a weight range of 2.3 ounces to 5.3 ounces. Scientists refer to it as Aegolius acadicus, and it is native to North America. The most common habitat for a saw whet owl is in conifers or dense thickets, where you can spot them at eye level. Due to their small size, saw whet owls are usually preyed upon by much large owls. The peculiar name of this particular owl is based on its sound, which is similar to the sharpening of a saw against a whetting stone.

Saw whet owls prefer to live reclusively in mature forests next to large water bodies. The main diet of these owls includes:

Because of the elusive lifestyle of the saw-whet owl, not much is known about its migration routine and population. 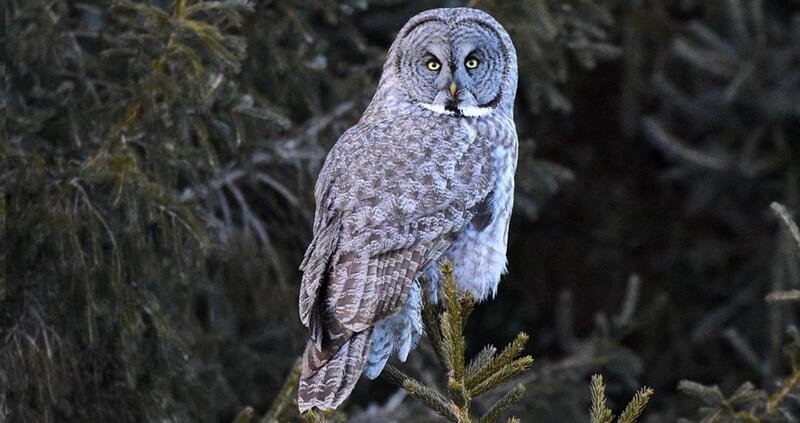 If you enjoy watching birds, then you would have a thrill watching the great gray owl hunt. It is the kind of bird that patiently waits, listens, and watches its prey, then swoops down and grabs it. The most astonishing thing about this owl is that it does not fear any snow. In fact, it will plunge into a thick mass of snow in the ground in pursuit of its prey. The great gray owl is indeed a great predator. Some of the preys that the great gray owl hunts include:

When living as mated pairs, the male owl is responsible for hunting and providing food for the family while the female owl broods and guards the young ones that may consist of: 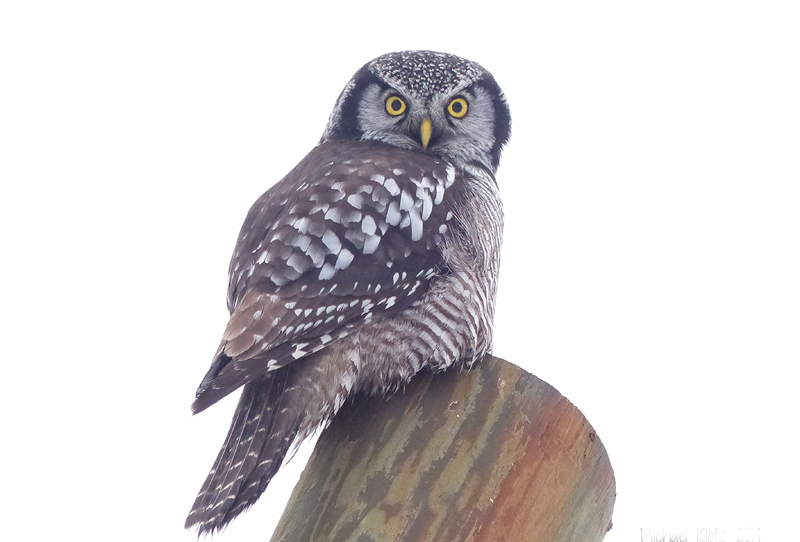 Although the Northern hawk owl is rarely seen in Michigan, it can be spotted there once in a while, because Michigan is within the southern range of the owl. The Northern hawk owl, also known as Surnia alula is medium sized with a length of between 14.2 inches and 17.7 inches. The wingspan of the owl is 27.9 inches and its weight ranges between 8.5 ounces and 16 ounces.

As its name suggests, the Northern hawk owl may look like an owl but it behaves like a hawk. In fact, the northern hawk owl is often confused with the Cooper’s hawk due to their similarity in appearance. A northern hawk owl is a diurnal creature that hunts in the daylight, making it easily visible to anyone keen on bird watching. During the night, the owl mainly roosts in trees.

Compared to other owls in Michigan, the Northern hawk owl are easy to identify because of their white dotted heads, brown feathers, tapered long tails, and stripped (brown and white stripes) under parts.

The owl is available all year long because it does not migrate during breeding or seasons. A northern hawk owl feeds on various types of prey such as: 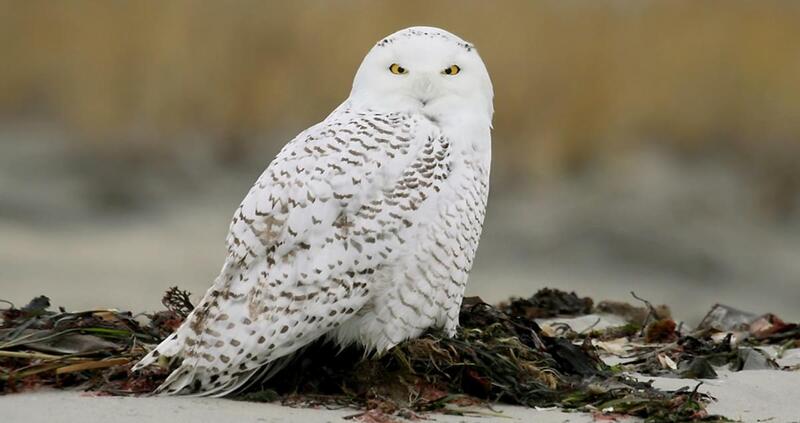 The snowy owl has a beautiful white plumage that provides a relishing view if you are lucky enough to spot one. Also known as Bubo scandiacus, the snowy owl belongs to the true owl species. It is large in size with a length range of 20.5 inches to 27.9 inches making it larger than the great horned owl.

You can find the snowy owl in several areas throughout Michigan state, because the owl only has a winter range. During the breeding season, snowy owls tend to migrate all the way to the arctic region (tundra) of northern Greenland and Canada.

The wingspan of a snowy owl is between 49.6 inches and 57.1 inches with a weight of about 56.4 ounces to 104.1 ounces. Unlike other owls, snowy owls do not have ear tufts, which make them easy to spot. They have smooth rounded heads that make them appear gentle and wise.

The preferred diet of the snowy owl is lemmings alongside small rodents, and voles. Other preys that the snowy owl may feed on include: 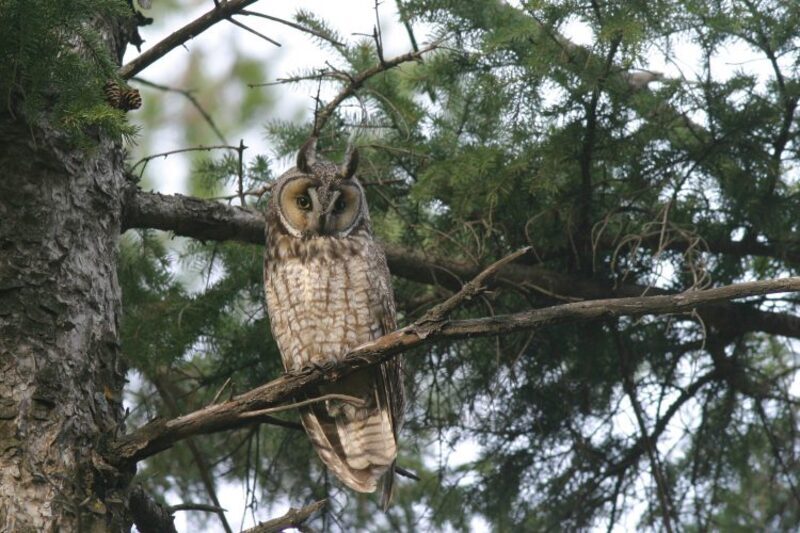 Long eared owls (otherwise known scientifically as Asio otus) are very common in the southern and central parts of Michigan. A long eared owl easily stands out and is easy to identify due to its long ears. However, these owls tend to camouflage making them very difficult to spot at a glance.

Like most other owls, long eared owls feed on small mammals and small birds. The hunting prowess of the long eared owl is very enviable because they are silent and fierce hunters. When the owl spots its prey, it stalls its flight, and then drops quickly with its talons widely spread ready to pounce and grab the prey. They also swallow their entire prey and later regurgitate the bones, teeth, and skin in form of pellets.

During mating season, the call of the male long eared owl is so loud that it can be heard more than a mile away. The preys that the long eared owl will most likely feed on include: