Due to the loss of nesting sites and habitats, eastern bluebirds were once an endangered species. Bluebirds faced stiff competition for nesting sites from starlings and house sparrows, which raised concern over their survival. However, due to the establishment of various birding groups and people setting up birdhouses across the country, eastern bluebirds are coming back again, and this time, they’re increasing more than ever. While it might come as a surprise, it’s important to note that eastern bluebirds were just as common as the American Robin, making it all exciting to witness their comeback. Most eastern bluebirds measure about 6.5 inches in length while also weighing up to 30g. A bluebird nest tends to vary between 5″ x 6″ in size.

The male eastern bluebirds are often characterized by having a reddish breast area, blue feathers for the upper part body, and a mostly white belly.

Arguably one of the fascinating birds to watch and keep out there, eastern bluebirds have interesting nesting habits. There are many practices that make this species stand out from the rest.

Below is a breakdown of some of the most common nesting habits among and way of life among eastern bluebirds; 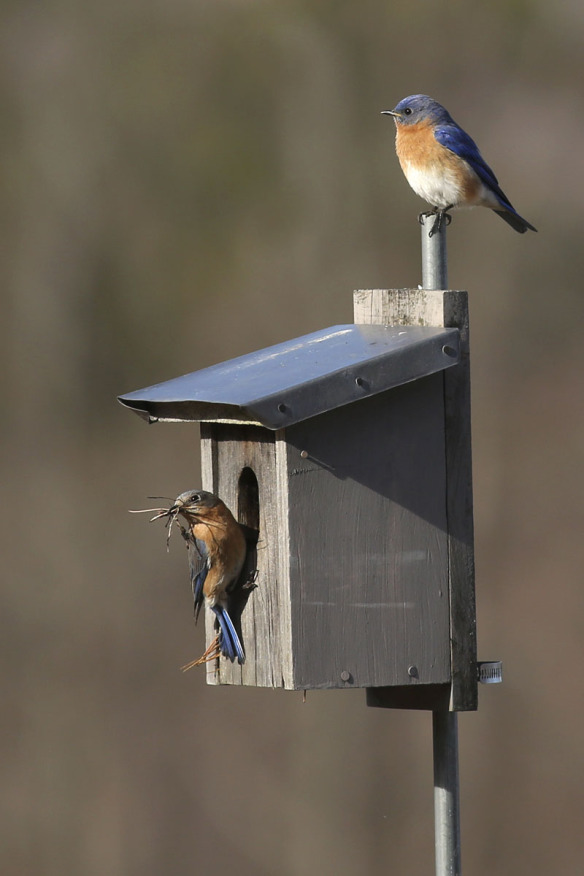 And based on how these birds have been on the verge of extinction before, you might want to begin on that plan right away. A bluebird nest is mostly made of plant stems, grasses, and pine needles, lined with feathers, soft grass, and in some cases with animal hair.

However, if you plan to put your eastern bluebirds in a birdhouse, you should place it on a pole about 5-6 feet above the ground. This allows for much clearer monitoring and protection. You want to ensure that you can spot all the house sparrows that could endanger the eastern bluebirds.

Also, when hoisting the birdhouse for the eastern bluebirds, you want to ensure that the bluebird nest proper predator guards installed and that it faces away from prevailing winds.

The best way to keep the predators at bay is to ensure that you remove the nest regularly, use baffles among other guards on the nest poles. If you’re not handy enough with a nesting box, it’s better to get a birdhouse that is ideal for monitoring.

These birdhouses are often built with a clearer side and have in-built cameras for monitoring. Eastern bluebirds are known to begin their nesting around February- April if it is their first nesting. However, this might happen a bit later in the year for the multiple nesters and first-time nesters. 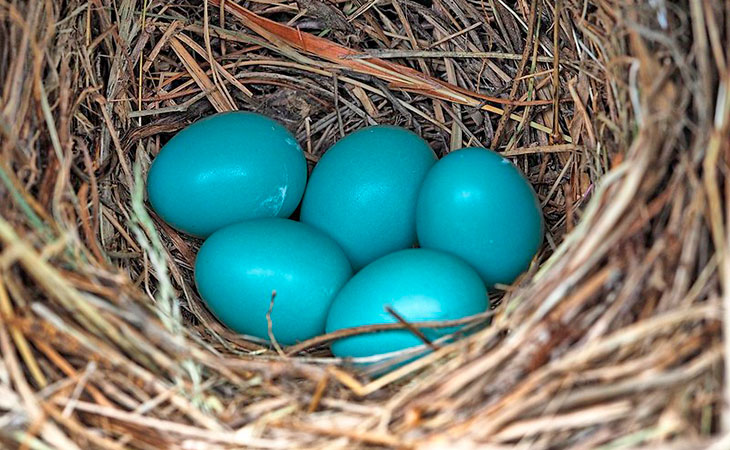 How many eggs do eastern bluebirds lay?

Eastern bluebirds often lay an egg every day until the clutch reaches 3-6 eggs that are pale blue or occasionally white in color. The female eastern bluebird is likely to begin the incubation process when they lay the last or next to the last egg.

While these birds might start sitting on their eggs as soon as the first egg is laid, full-time incubation doesn’t begin until the last of the eggs is laid. The delay in the incubation process among the eastern bluebirds is a result of the prevailing weather conditions. 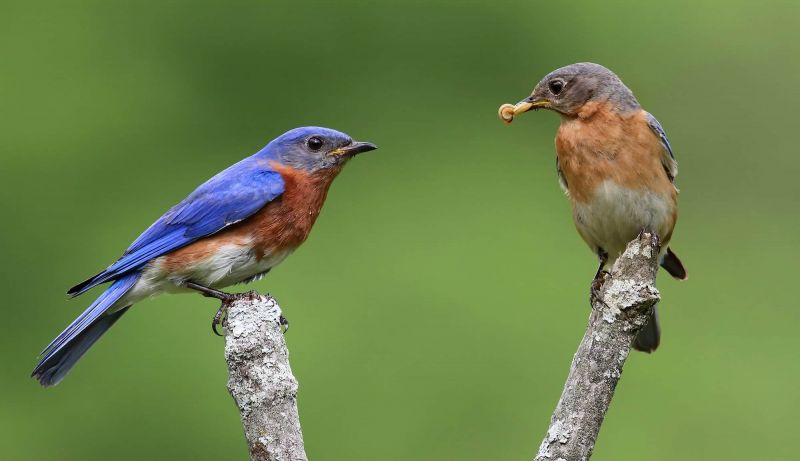 Eastern bluebirds, like many songbirds, display very unusual mating habits. Eastern bluebirds are widely regarded as one of the North American bird species that are socially monogamous but genetically polygynous and polyandrous.

Although there have been previous studies by different scientists naming eastern bluebirds as monogamous birds, this is no longer the case. Recent studies have shown that these birds no longer stick to one mating partner.

For this reason, whenever a better male mate comes along, the female eastern bluebird is bound to pick them. Another reason attributed to the female bluebirds multiplying male partners is that the one they pick might not have the best territory or site to build a nest.

Also, some studies have shown that a female eater bluebird is bound to multiply their male partners until they get one responsible for taking care of the young ones. For the male eastern bluebirds with no suitable site or territory, their options are very clear. 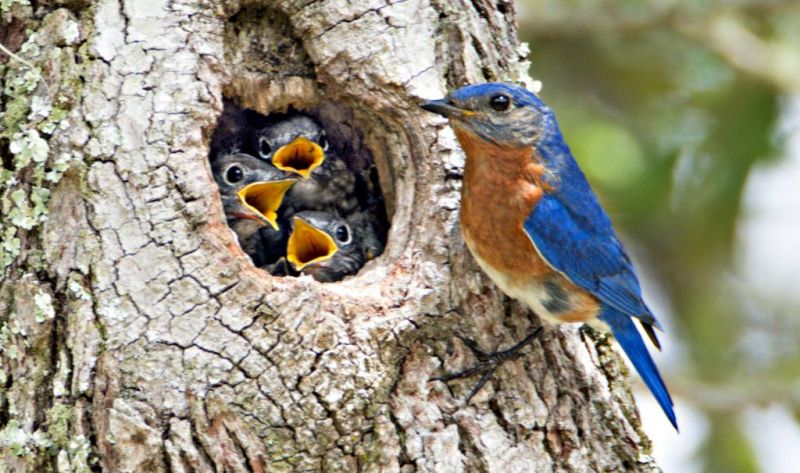 Feeding habits among the eastern bluebirds

Eastern bluebirds are known to feed on insects mostly. Research shows that 80% of these birds’ diet is made up of insects in both spring and summer. Bluebirds feed on a wide range of insects, including beetles, crickets, and grasshoppers, among many others.

If you’re keeping eastern bluebirds at your home, you might want to try feeding them dried fruits or chopped peanut kernels. However, the best way to lure these birds into your bluebird nest is by offering them mealworms because they are known to love them.

If you’re trying to keep the eastern bluebirds around, offering them live or dried mealworms through a specially designed feeder is a great idea. This ensures that other bird species do not feed on them before they do.

For the mealworms, you can find them online, grow them at home or at your local pet supply store. However, do not consider feeding these birds birdseeds because they rarely eat that. It’s also important to note that eastern bluebirds are attracted to birdbaths more so those that involve running water with lots of splashing noises.

How do the eastern bluebirds feed the young ones?

When it comes to feeding the young ones, this is usually a family affair for the eastern bluebird. This is because both the male and female take part in feeding the hatchlings. Also, it’s not unusual to spot fledglings from a previous nest feeding the newly hatched young ones.

If the female eastern bluebird goes off to build a new nest, the male mate will remain behind and keep feeding the fledglings until the female comes back.

During this period, the male eastern bluebird teaches the young ones how to find food and protect themselves from impending predators. The young fledglings tend to leave the nest after about 18-19 days on average. Also, it’s very common for the adult eastern bluebirds to chase away the fledglings when there is another clutch that needs to be incubated.

Keeping eastern bluebirds in your birdhouse is a big responsibility that comes with lots of challenges. This is because you have to be a bit more involved compared to other birds out there. You’ll need to look out for predators more often and clean their nests frequently.

With eastern bluebirds perching on your birdfeeders, you get the most beautiful and colorful birds you can get. It’s also worth mentioning that you will fill your home with beautiful sounds from these birds.