Pigeons are those cute, plump little birds that seem to pop up everywhere. From the Rock Pigeon to the Mourning Dove, there are many different types of these birds roaming in the city and country. One unique habit of these birds is the way they nest. They have a unique way of building their nests, taking turns sitting on the eggs, and then taking care of their young in that nest. We have all you need to know about pigeon nesting habits. 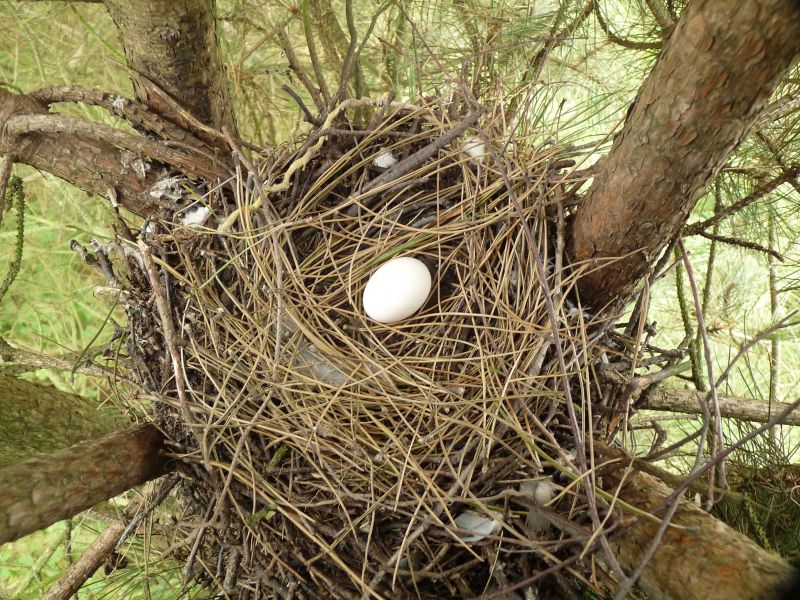 The main requirement for a pigeon nesting site is that it is dry and protected on a flat surface. They usually like to nest in attics, on roofs, ledges, eaves, and under bridges. Their natural nesting site would be on a rocky cliff crevice or in a cave. This is why they typically nest on high, flat ledges.

Courting And The Nest

The nest isn’t a true home until a male pigeon finds his mate. The male starts to build the nest while calling out for a mate. He’ll sit on the nesting site until he attracts his lady. He will often strut around cooing at his favorite lady. If the female is interested, she will return the favor. The two will “kiss” by billing each other. After the male pigeon attracts his favorite female pigeon, he will start searching for nesting material. He does not want to waste any time. He will start to bring her one twig at a time. If the female pigeon doesn’t stay up to his pace, he will drive her into the nest and strike her with his wings. Finally, the female will take the twigs he has brought her, tucking them underneath her as the nest starts to build around her. Pigeons usually remain together for eternity. They usually mate in pairs. After they go through their dating stage and mate, it’s time to have squabs. If one of the pigeons passes away or is somehow separated, one will mate with another single bird. During the day, the male sits on the completed nest that usually contains one or two eggs. The female will take her turn overnight. Pigeons nest throughout the year. They might have 10 squabs each year. 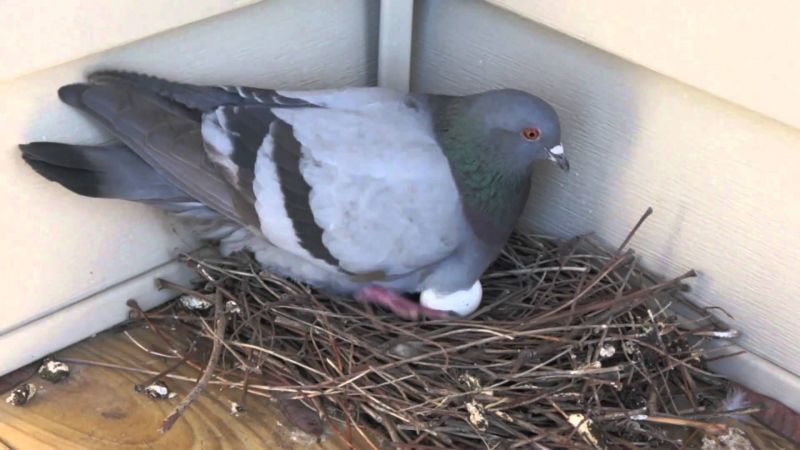 The Look Of A Pigeon Nest

If you stumble upon a pigeon’s nest, it’s not a pretty sight. It looks like a mess of grass stems, pine needles, twigs, sticks, and other debris. It’s piled up with a small depression in the middle. A nest is used throughout the year, so it will start to accumulate more droppings and feathers. Many birds remove droppings from the nest, but pigeons do not. The droppings start to essentially glue together all of the nesting materials. After a brood is pushed out of the nest, the pair uses the same site for the next brood. They simply add new nesting material. These “new” nests may include mummies of pigeons that didn’t survive and unhatched eggs. A nest that is reused multiple years may grow up to eight inches tall and 20 inches wide. They may weigh almost five pounds.

The female usually lays about two eggs within the first few days of nesting. One unique thing about pigeons is that both the male and female will sit on the eggs to insulate them. Most of the time, the female will be in the nest from the middle of the afternoon to the middle of the morning. This will go on for about 18 days.

The young pigeons called “squabs” are born covered in yellow down. While the squabs are in the nest, they eat crop milk. Crop milk is thick regurgitated liquid that comes straight from the parents’ mouth. Squabs are fed this way for about ten days when they can start eating what the adult female and male pigeon eat. The squabs will double their size in about two days. This makes baby pigeons one of the fastest growing vertebrates. In two weeks, baby pigeons will get their flight feathers. They’re covered in feathers by their third week of life. Their tail will completely full of feathers by their 28th day of life. It’s now time to leave the nest. The time that a squab is in their nest is about 15 days longer than most backyard birds. Once the pigeon is gone, the female pigeon will begin laying new eggs almost every month. 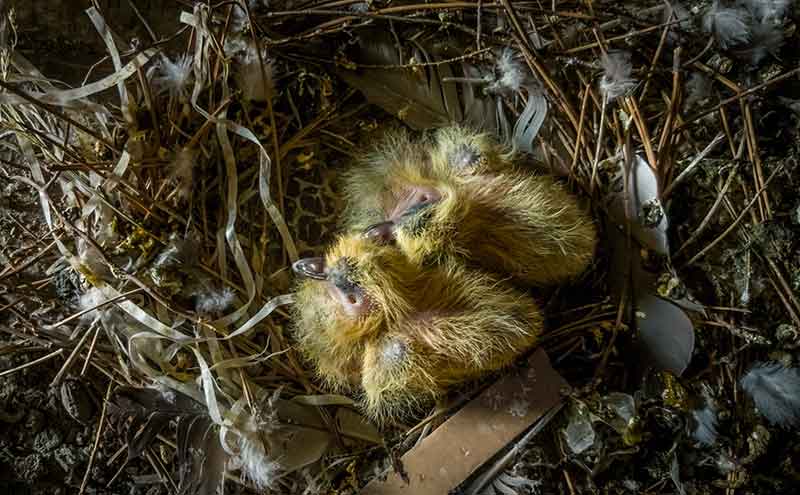 Getting A Glimpse Of Squabs

Many people wonder why they never see baby pigeons. This is because baby pigeons love their nest. They hang out in their nest as their feathers grow in. Squabs are a tasty dinner, so it’s important they stay in their nest so they aren’t eaten. The baby pigeons will finally leave their nest when they are full grown. The short, fat pigeons that are usually seen on your lawn, woodpigeons, you’ll be able to identify a young pigeon because they don’t have a white flash on their neck until they’re adults. Getting a glimpse of these babies is tough because they’re well protected and don’t need to leave until it’s time.

Unique Eating In The Nest

If you are lucky enough to observe baby pigeons, you’ll notice their feeding cycle is unique to other birds. Besides eating their crop milk, they have other special patterns. Either the female or the male will feed the squabs. Once the parent lands near their nest, it seems to be a race as to which bird will be the first to insert their tiny beak to get that food. The parents stay dedicated to feeding their babies until they’re able to leave the nest. Every day, one or the other would arrive with food for the young birds.

NOTE: though tempting, if you stumble upon a pigeon nest, try to resist the urge to feed the squabs yourself. It’s important that they get fed by mom or dad. If you want to help out and do your part, the adult pigeons would probably love some pigeon seed. 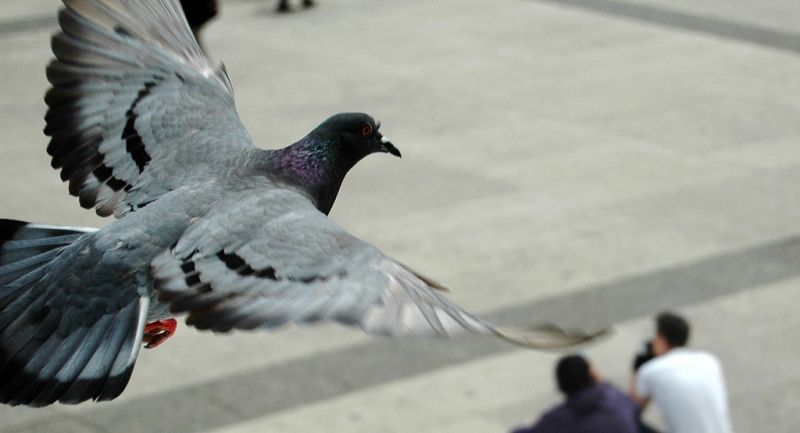 Pigeons are loyal to their nests. As we mentioned before, they have numerous broods in one nest. These birds are known to return to whatever their home may be. Pigeons were used to carry messages are far back as 2500 BC, The ancient Greeks and Romans used them to carry messages, then Persia and Syria made a messaging service with pigeons. In the 19th century, pigeons carried messages for news agencies and financial institutions and news agencies in Europe and even providing an airmail service in New Zealand. The point is that pigeons are a bird that know how to take a message somewhere then return home. They can gather food all day, then return to their nest without any issues.

Pigeon Nests And You

Depending on where you live, you may want to help provide nests for the local pigeons (or alternatively if there are too many pigeons around already, possibly deter them from nesting in your area). Here are some tips:

If you are in a place where you can provide a nest for pigeons, it’s important that each pair of birds gets at least two nests. This is because pigeons usually have a few broods of squads. They need two nests so they can adequately care for each brood of the baby pigeons or their eggs. Their nest should be build twelve inches square. You should always attach a three-inch long perch. They prefer tobacco stems, straw, or hay as the base of a constructed nest.

If you would rather your home not become a nest for these sweet squabs, you should keep things very clean. Pigeons like to build nests in a place of shelter. They don’t like a lot clutter or clamor. They usually make their nests when no one is using an areas. If you don’t want them on your patio, make sure to keep it swept. They love to pick up leftover debris to make nests.

It’s important to never move a pigeon’s nest. It might seem normal if you think they might be in danger, but a nest location is critical to their survival. Only licensed professionals can move a pigeon’s nest. Pigeons don’t have a sense of smell to find their new nesting location. If you move a nest, the parent may abandon their young. This is critical because squabs need parents, even after they have left the nest. The male and female pigeon will still show their young how to escape from predators, fly, and integrate with the flock. If you need to move a nest, it is best to wait a few months until the squabs are for sure out and about on their own. The parents will be forced to make a new nest elsewhere for their next brood.

You may spot a pigeon in your backyard. They are attracted to large, open areas where it is easy for them to find food places on the ground. The only issue with this is that ground food can attract rodents. It’s usually best to only feed pigeons when you see them in your yard. They enjoy peas, dried corn, or sorghum.

A pigeon nest is a unique home that can house hundreds of birds over time. Each brood is full of new squabs hungry for their new life. If you get a chance to see a squab in their pigeon nest, take note of the excitement. The nest is an artistic place where parents can raise dozens of little squabs until they’re ready to bust into the world on their own.