The Flame Robin is a unique black bird with an orange chest. This beautiful bird is also referred to as a Flame-breasted Robin, Redhead, Bank Robin and Robin Red-breast. The males have bright orange throats and breasts with white on their undertails and lower belly. When folded, you can clearly see a white stripe on their wings. Their back and head are a dark slate grey and they have dark brown legs and a black bill.

The appearance of the female Flame Robin is different from the males. They have mostly white feathers on their outer tails, are almost all grey-brown and their wings have a pale buff stripe. When young, you will discover they look a lot like adult females. The difference is their brown backs have many buff streaks and brown streaks their pale bellies.

The Flame Robin is between five and six inches long. The bird is slender with a small head, thin bill and long neck and wings. We have seen many people confuse the male Flame Robin with a male Scarlet Robin since many of the features are similar. The call most frequently used by the Flame Robin is a sweet descending song with a high pitch delivered in sets containing three notes. We have heard this interpreted as come with me to the sea. 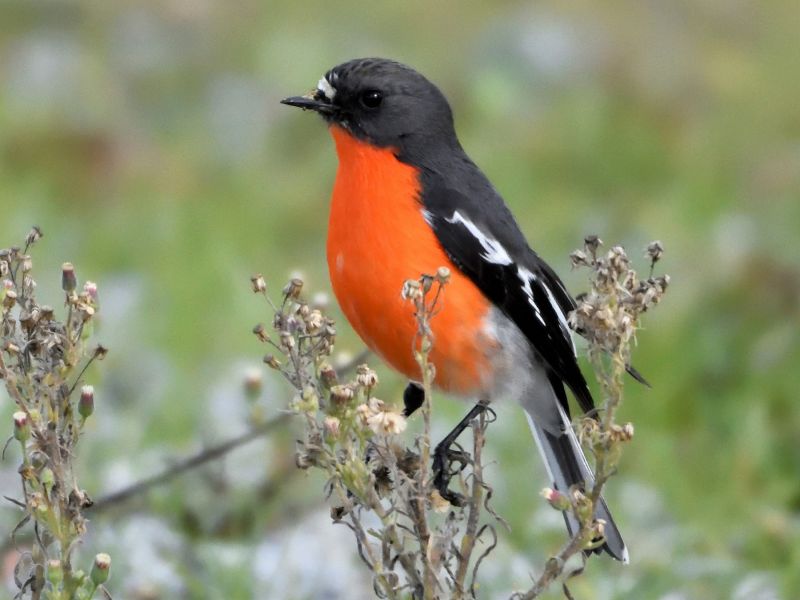 The native land of the Flame Robin is Australia. You will find this bird in the coolest areas of south-eastern Australia as well as Tasmania. During breeding season in the spring and summer months, we generally see them in pairs. In winter, you will find them in open country in loose formations. Flame Robins prefer the broad coastal band stretching from west of the border of South Australia to southern Queensland.

During winter, many of the birds relocate to the inland plains and slopes. The belief is two separate populations exist. One prefers Southern to Central Tablelands and the other the Northern Tablelands. The preference of Flame Robins is woodlands and forests approximately 1800 millimeters above sea level. The majority of breeding occurs in the Bass Strait islands, the Tasmanian highlands and the Great Dividing Range.

When the temperatures drop in the autumn, the majority relocate to warmer and lower areas. Some travel a long way to southern Queensland, South Australia or fly across the Bass strait all the way to Victoria. When the birds breed in warmer climates found in New South Wales near the Blue Mountains, you can find them throughout the year in highland territories.

After breeding season, we usually see them in pairs or flying solo. Sometimes you will see loose flocks of this beautiful black bird with an orange chest traveling together. Some of the more common positions are foraging for food on the ground and perched. The bird assumes an upright pose with a maximum angle of 45 degrees. The wings are held low and underneath the tail. The Flame Robin appears to be twitchy and nervous due to the flicking of wings before becoming still.

The fast flight and feistiness of these birds often has people very captivated. These birds are extremely territorial and will defend their territory from other members of the species in addition to scarlet robins. We found the occurrence in Nimmitabel interesting: The migratory birds in southern New South Wales invaded and took the territory from the Scarlet Robins.

Once the birds were settled, there were no dominant species and boundaries were set. The Flame Robin is often an antagonist and puffs out its breast to show the breast feathers. A white spot is then revealed and draws the eye to the breast, white markings on the wings and the outer tail feathers. When defending their territory, the Flame Robin will sing or fly directly at the intruders. 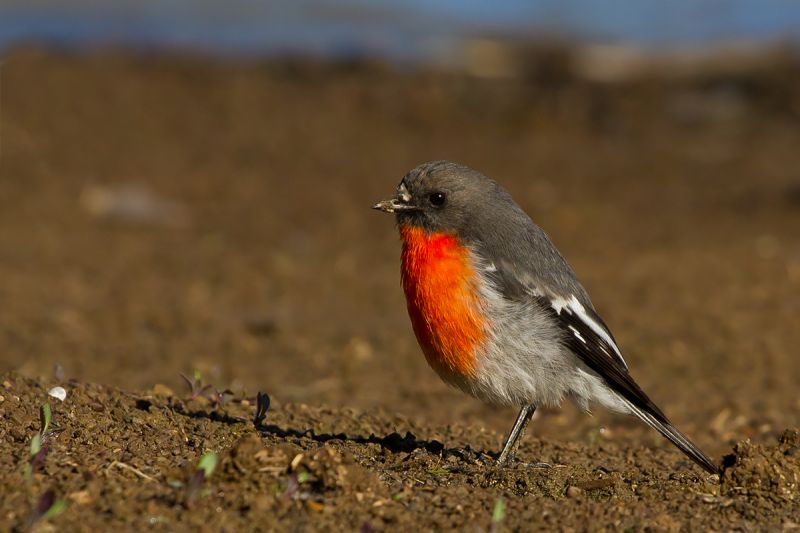 The Flame Robin is attracted to areas recently burnt, but their habitats often become unsuitable due to new vegetation after the area regenerates. The birds circulate above their habitats and through the bark and foliage searching for invertebrates and flying insects. During the winter months, the birds migrate to more open and dryer lowland habitats including western plains and slopes and valleys beneath the ranges.

The birds are also found in dry forests, open pastures and woodlands and native grasslands both with and without trees during the winter. We have occasionally spotted the Flame Robin in coastal shrublands and heathlands at this time. They pounce on smaller invertebrates from lower perches, tree trunks, the ground, coarse woody debris and logs.

Winter and autumn habitats are open with prominent perches including thistles and fence posts. You can spot them alone, in pairs or in flocks with about 40 birds when they are not breeding during spring and late summer. When in a mixed flock, the other birds are insectivorous.

During the spring and summer months, this gorgeous black bird with an orange chest is usually found in mountainous or hilly areas, wet eucalypt forests and on slopes and mountain tops with a maximum elevation of about 6,000 feet. The Flame Robin prefers areas with less understory and more clearings. The favorite habitat of these birds is tall forests including the following trees.

On occasion, you can find Flame Robins in temperate rainforests. During the autumn and winter months, the birds prefer open areas with the following trees.

Although you can sometimes find these birds at a higher altitude, they find a lower altitude preferable. 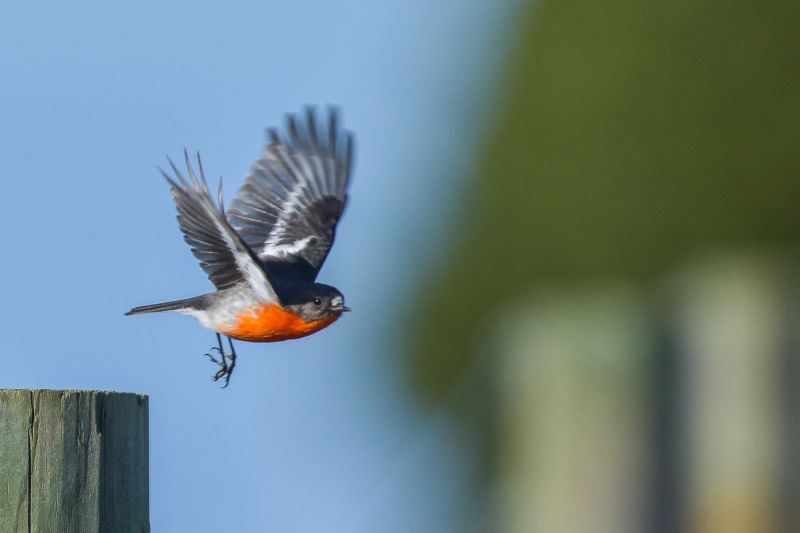 Flame Robins are predominantly insectivorous and often join flocks including Scarlet Robins, White-fronted Chats, Hooded Robins and Richard’s Pipits. These birds are pounce and perch hunters and consume mostly insects. You can often find them on their favorite perches standing motionless and erect while searching leaf litter for additional prey.

The main diet of a Flame Robin consists of small arthropods, spiders and insects. The birds watch from exposed lookouts for prey on the ground, pounce and then take the food back to their perch to consume. Flame Robins also eat numerous beetle families, ants, wasps, bugs, flies and caterpillars. Favored invertebrates include earthworms, millipedes and spiders. Small prey is consumed whole, with larger prey smashed against rocks or hard surfaces to break apart before eating. 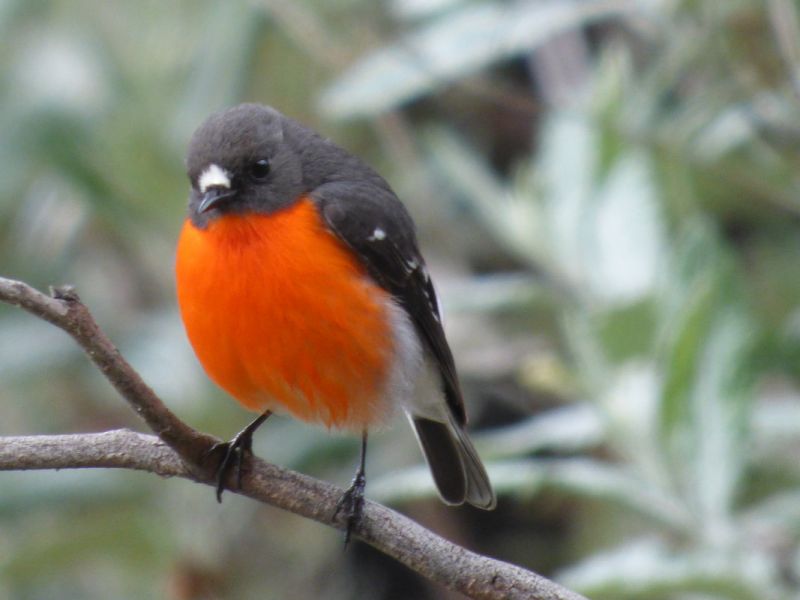 Regardless of the specific courtship ritual, the male will chase the female. The majority of mated pairs remain monogamous. Unless one bird dies, the pair will stay together. We have also seen records of “divorces”. The breeding season begins in August and ends in January. The typical pairs raise one to two broods. The male hops around to suggest a suitable site for nesting to the female.

The difference between this bird and other robins is the site is sometimes chosen by the female. Most pairs find a suitable site within one to five days. The nest is built by just the female. The Flame Robin demonstrates more versatility than other robins and has been recorded nesting in Tasmania in Mount Wellington and in sheds. The egg clutches are either blue or pale green with brown markings.

In most cases, you can find the markings on the larger end of the egg. The female builds the nest in a bark and grass cup filled with bark, moss and dry, soft grasses. Spider webs, fur and feathers are used to bind everything together or for filling. Lichen is used strictly for decoration. The nest is usually placed 20 millimeters above the ground in a rock face or a tree cavity.

Similar areas are also used. The eggs are incubated by the females and the male is responsible for bringing food to his mate. Once the eggs have hatched, the young chicks are fed by both the male and female. You can generally find nests fairly close to the ground in a sheltered area or bank. The average clutch contains between three and four eggs.

We have also seen nests located in crevices, tree forks, the ledges of riverbanks and on cliffs. A typical egg is 14 mm by 18 mm and can be brownish or greyish in coloration. The incubation period requires 14 days and the eggs remain in the nest for 16 days.