Hummingbirds are amongst the most common birds Colorado boasts. They have captured many people’s attention and interest for a lifetime. Hummingbirds, in general, are small and very fast.

For this reason, it can be pretty hard to differentiate the different types of hummingbirds that exist. Usually, they appear quite green with dazzling fuzziness that strikes your face.

Most Hummingbirds species often start their yearly migrating every February, from South America’s warmer climates northwards to Canada. On the way, many of them end up stop in Colorado or any other central part of the United States.

These birds begin to appear in Colorado in mid-April, and the numbers increase by the end of the month. The busy ones tend to stay around until august before continuing with their journey. And in September every year, these bird species leave for southern states where the climate is warmer.

With these mass migrations, hummingbirds are an ordinary miracle of nature. They can cover a distance of more than 20 miles in a day. Thanks to their powerful hearts that can beat up to 1260 times every minute. Their wings can flap about 80 times every second, making them nearly invisible when they appear floating in the air.

Colorado boasts 10 species of hummingbirds; that’s quite an impressive number. They include:

In this article, we’ll be looking at each species in detail. That is their range, fun facts, and easy ways to attract these incredible-looking birds to your backyard.

The 4 Common Hummingbirds Species in Colorado

While there are about 10 species of hummingbirds in Colorado, only four of them are the most common in the state. They include the following: 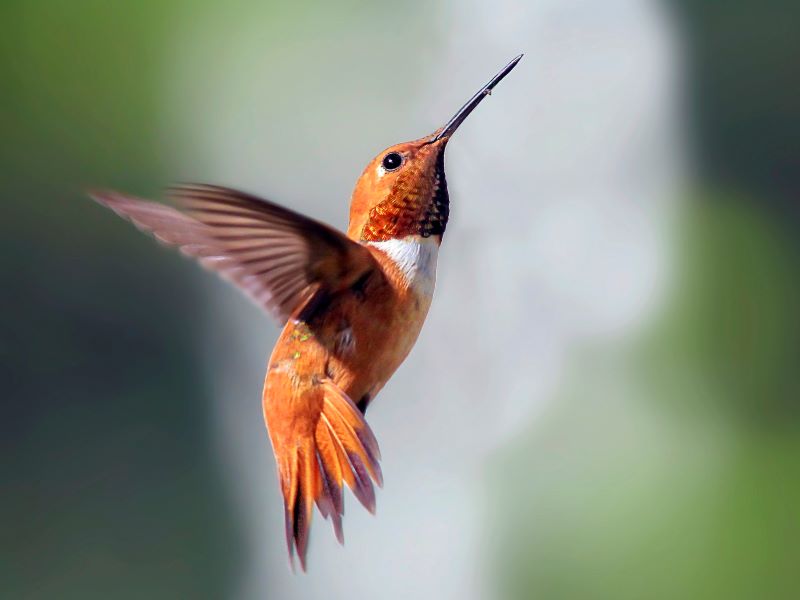 How to Identify Them

Most of the males are easily identifiable with a bright copper-orange back and their bellies’ sides. You’ll find some of them with greenbacks. They also boast a stunning reddish-orange iridescent throat. Their breasts are white and have an ear spot behind the eye. Unlike other hummingbird species, the Rufous males are pretty small.

As for the females, you’ll know them with their crowns, necks, and backs, all covered in green. They have copper-colored sides with white breasts and bellies. Some of them have distinct red or orange spots on their throat.

These beautiful birds have an impressive migration pattern. They’ll fly north to the pacific coast during summers for breeding. These hummingbirds will migrate to the south in winter periods, following a different path along the Rocky Mountains. These birds have the longest migrations than any other bird in the world, thanks to their incredibly small size.

How to Attract Them

Rufous Hummingbirds are very common in Colorado, and you’ll see them across the state. If you’re looking to attract one to your yard, here’s what to do:

• Set up nectar feeders as nectar is the chief food source for hummingbirds.

• Grow native plants that give rise to long and tubular flowers. Look for red ones as these birds naturally get attracted to this color.

Other than drinking nectar from plants, the Rufous Hummingbirds hunt flies, midges, and gnats in the air. They also pluck aphids from the leaves. Their nests are crafted from soft plants held together downwards using spider webs. Like most species, the females prefer bark, moss, and lichen for camouflage.

These hummingbirds in colorado make a series of chipping notes as a common sound that acts as a warning to other intruding birds. The males tend to make a “chu-chu” call when flying low to impress the females. 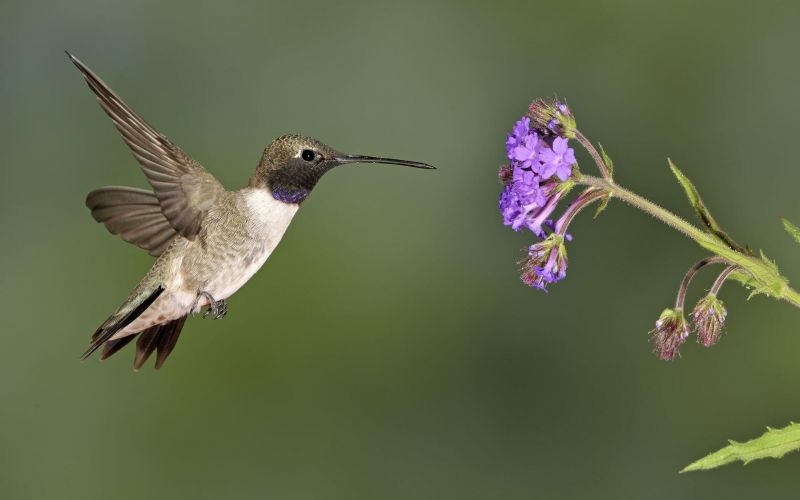 This type of Hummingbird has its breeding range situated in central and western parts of Colorado. Both the male and females have bright white bellies. The back parts of their eyes also have a white spot.

As for males, they have a medium size with their bodies covered in metallic green. They also have greenish flanks and white chest areas. The head generally looks black except the crow, which is very dark green. Their lower throat is lustrously violet.

The females’ back is green, and their heads have a greenish-grey cap. These birds have white breasts with dark-grey spots on the throat.

Black-chinned Hummingbirds migrate to Colorado during summer periods to breed. And in winter, they leave the state for Mexico’s west coasts.

Where to Spot them

These birds are incredibly adaptable, and you can find them in many different habitats. Be sure to look for these hummingbirds in alpine meadows and mountains, orchards, canyons with thickets, urban places, and newly disturbed areas.

How to Attract Them

It is easy to attract this bird species to your yard using a hummingbird nectar feeder. You can also grow tubular plants in your yard to increase the chances of getting one to your sight. 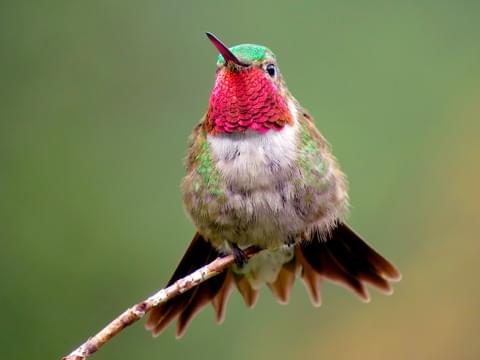 The Broad-Tailed Hummingbird features a breeding range in most parts of Colorado. You’ll find them mostly occupying open woodlands and mountain meadows. Typically, these birds tend to breed at higher elevations from 5000 to 10500 feet.

How to Identify Them

Adult males are easily identifiable thanks to their white breasts. Their heads, backs, and tails are all covered in green plumage and also have buffy flanks. To spot them, check out their glossy red throat.

Like other types of hummingbirds, the female Broad-tailed hummingbirds are relatively larger than the males. However, what makes them different is the lightly speckled throat, white chests, and brown-like belly. The head and back are also green.

This type of hummingbird in Colorado stays in the state for several months, usually from the end of May and early August. You’ll see them across the entire state, especially during breeding seasons.

The males often perform impressive displays while flying to attract the females. You’ll find this type of Hummingbird very promiscuous and tend to have many mating partners when the breeding time comes.

These birds rely on insects for protein. So, they’ll hunt and catch bugs or flies in mid-air, from a spider web, or on leaves. These hummingbirds will drink sap that drips from trees drilled by Red-naped sapsuckers.

How to Attract them

These birds don’t like visiting gardens. You may get lucky to attract one to your yard using hummingbird feeders and planted tubular flowers. 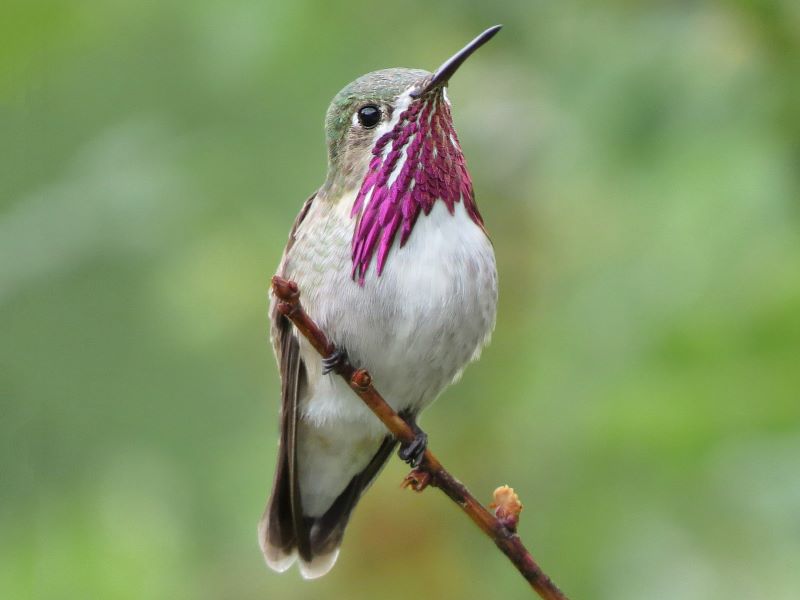 How to Identify them

The Calliope Hummingbirds are the smallest Hummingbird you can find in the state. However, you can easily identify the males. Thanks to their long throat plumage that looks like stripes falling down their necks.

Their heads, upper parts, and flanks are all covered with green plumage. Their chest area and belly are brightly white. During the mating period, you will see the males performing a stylish U-shaped dive to impress the females. The females’ throat boasts dark spots rather than brilliant magenta feathers.

This is a native seasonal migrant hummingbird. It often comes to their breeding grounds every late May to mid-June. That’s the time these birds are pretty common and easy to find in Colorado.

Since they are tiny, this species of Hummingbird often covers a longer migration route. They spend most of their winter months in Mexico. But during spring, these birds leave for a long migration to the Pacific coast, where their summer breeding grounds are located. Some tends to appear at feeders when they migrate.

As they fly, you can hear these hummingbirds make a buzzing sound through their tail feathers. They also make a high-pitched “zing” call. Other than drinking nectar, the Calliope Hummingbirds hunt and feed on small insects that fly in mid-air.

What’s more, these birds use conifer trees to make their nests. Like most hummingbirds, you can easily attract these birds to your backyard using suitable nectar feeders and naturally nectar-bearing flowers.

Here are the hard-to-find of hummingbird species in Colorado you may watch out for: 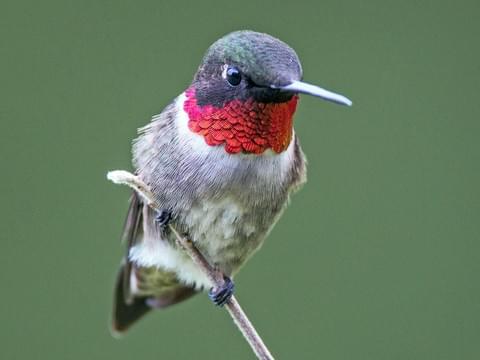 The males have ruby-red-colored throats, white collars, greenback, and forked tails. For the females, you’ll find them covered with greenback and tail plumage which is banded black, white, and grey-green. In addition, the females have brown wings and white bellies.

Ruby-Throated Hummingbirds often live in orchards and meadows. Before the onset of their breeding season, the males make nests for the females lay eggs and hatch. These migratory birds tend to live on the eastern side of Colorado.

The males tend to perform courtship displays that include sweeping dives of 50feet high. After the female gets impressed, she enters the male’s territory. The males are polygamous, and the female takes the responsibility of raising their young ones.

Like most hummingbirds, the easiest way to attract the Ruby-Throated Hummingbird is to use ideal hummingbird feeders and also growing tubular plants.

Anna’s Hummingbirds have their bodies covered with grey and green feathers. The male has pink feathers on their necks which makes them easily identifiable. They breed in shrubby or open wooded areas, including at the mountain meadows. You can also spot a few in urban areas and are regular visitors to gardens.

These hummingbirds are spotted in Colorado after their breeding season ends, which usually starts mid-December or June. They are among the largest and most vocal hummingbird species in the U.S. the males make a series of complex scratchy noises that sound like “chee-chee-chee” as they move from one flower to another.

Their territorial habits make Anna’s Hummingbirds quite unique. The male often makes elaborative dive displays at other birds and even people. 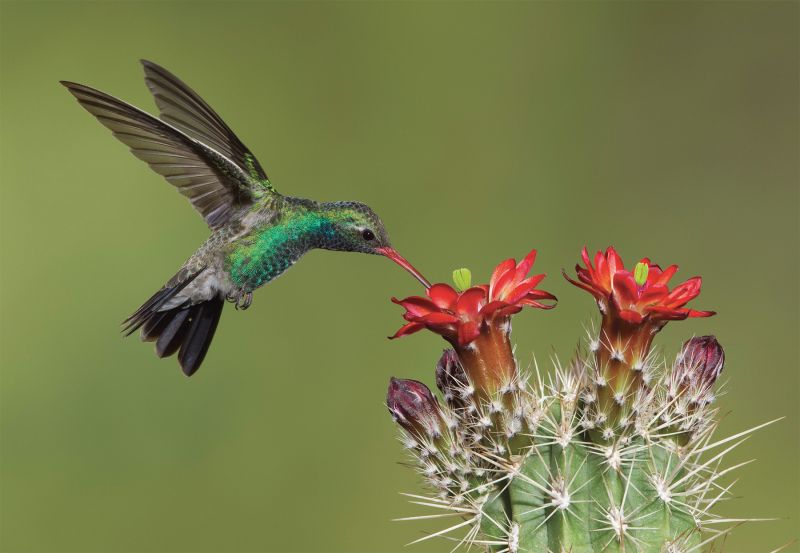 These hummingbirds are well-covered in green and blue yet brighter feathers. Unlike their name, these birds have feature thin, long, and bright red bills.

They are common in open areas like the meadows and canyons. Several sightings of this bird exist in Colorado, especially in the southern parts.

During breeding, the males tend to call and attract the females to their territories. Upon entering the territory, they make a courtship display for them. The breeding pairs tend to break up as the females take care of their young ones.

You can use a sugar water feeder without food coloring agents to attract this type of Hummingbird. They’ll also visit brightly colored flowers produced by native plants. 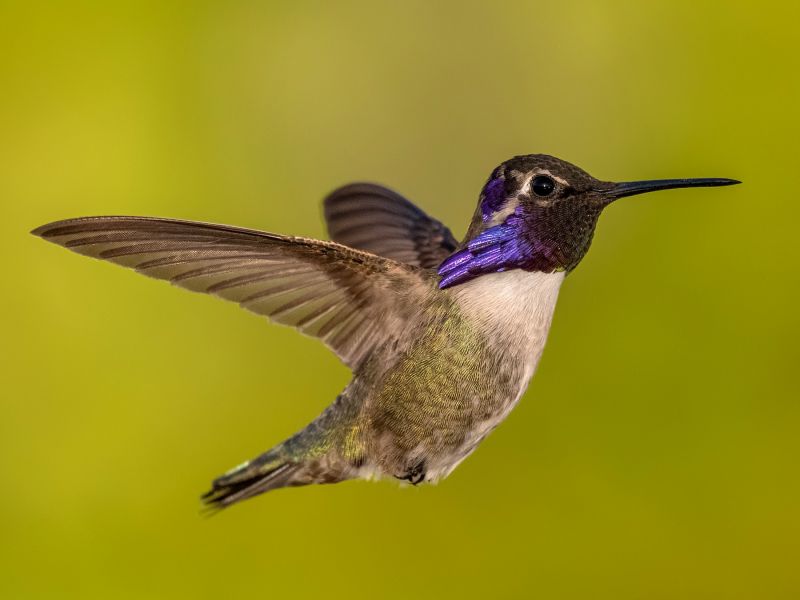 This bird has most of its feathers with duller and paler shades. But the males’ heads have brighter purple feathers. The males are also very protective of their territory and will regularly perch high in trees to watch out for their territories.

Though they’re not popular in Colorado, you can see them in the southern part of the state. They may also be seen outside the state after their breeding season is over. The males follow strict courtship displays, which involve aerial dives that last for about 30-40 seconds. 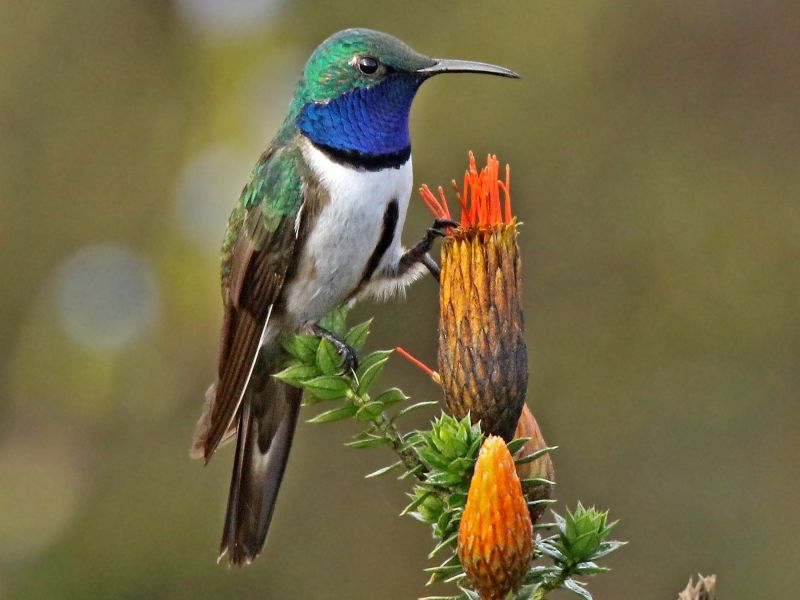 This hummingbird species features upper feathers that are dull green, fades to a medium grey on the belly and undersides. The backside of their eyes has white stripes with a much narrower line extending backward from their bill’s corner next to a black cheek spot. The female and young birds here have grey throats. 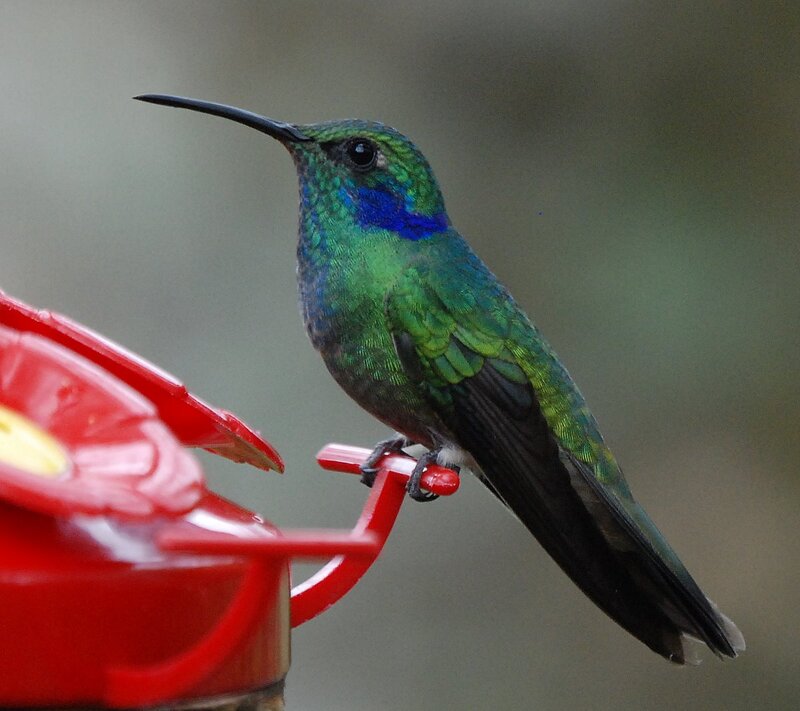 The Green Violetear Hummingbirds are the rarest species you can find in Colorado. As the name suggests, this bird species is mostly covered in green plumage. Their underwings are grey and have blue patches next to their eyes.