Bird watchers often enjoy watching the hundreds of house sparrows that visit their yards each year. Sometimes these aren’t everyone’s favorite birds, but they seem to be the most common in everyone’s backyard. Identifying house sparrow eggs is something every birder may want to learn so they can both control the environment of this bird, as well as watch new ones hatch. House sparrows are interesting, and their nests are just as unique as their species. 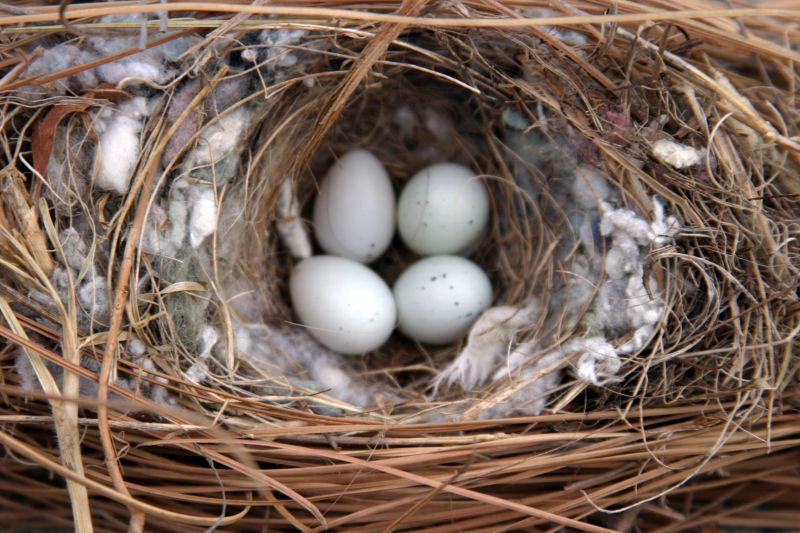 Identifying house sparrow eggs compared to other birds’ eggs isn’t that difficult. The eggs are about 22.5 x 15.5mm. They are glossy in appearance with a whitish look. They often have heavy brown or blue-grey speckles. Some may look like brown and gray spots. House sparrows usually lay from three to six eggs each time. When a house sparrow lays eggs in higher altitudes, she will usually not lay as many eggs. A clutch size often depends on season conditions, the female’s age, the environment, and breeding density.

Sometimes identifying house sparrow eggs seems strange because the sizes are different. The sparrows that hatch from larger eggs are bigger than the smaller ones. This is no surprise, but it’s strange for some people to see. Researchers say that the difference from the smallest to the largest egg in volume might vary by up to 50 percent. Most larger eggs are good for the short-term survival of the young because during rainy times the parents must venture into the world to get food for their young. Nestlings need to have more energy reserves from a larger egg to survive while the parents find food.

Researchers also found that young hatched from smaller eggs do better in warmer temperatures. Extra reserves are better in very low temperatures. At high temperatures, the same reserves help long-term survival from the faster growth. It is possible for the young to grow too fast. This might happen when an egg has a high level of reserves mixed with too much food and high temperatures. This can lead to a lower survival rate. Oxidative stress is often behind this phenomenon. The bird’s fast growth increases its reactive oxygen species. When an animal grows too fast, the body’s defense against the compounds can’t keep up. This stress on their body leads to shorter telomeres. Telomeres are the caps at the end of DNA strands helping to prevent the genes from getting damaged when cells divide. The length of life and the length of telomere have been directly connected by biologists. 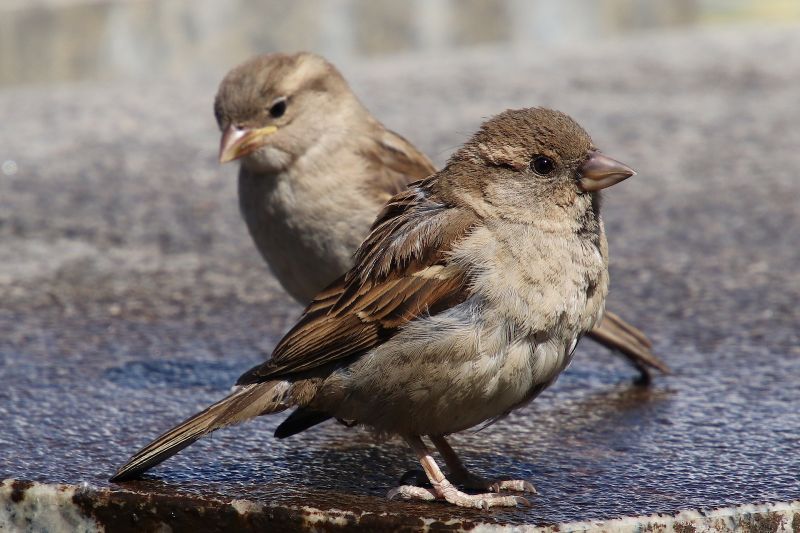 House sparrows cannot predict the weather to ensure their entire batch of babies is best fit for survival. They solve this by laying different sizes of eggs in the same clutch. This helps increase the chance that some of the eggs in a clutch will survive.

Back To The Beginning

The eggs and nests of house sparrows all start with their mating habits. Courtship usually begins in January and finishes in July. The male house sparrow will claim its nesting site and fight any other bird that tries to step on their territory. The male starts to chirp to attract his female friend. When she gets close to the nest, he starts to chirp louder. Sometimes, other males will join in trying to get the same lady. When the birds finally pair, the mating ritual can begin. 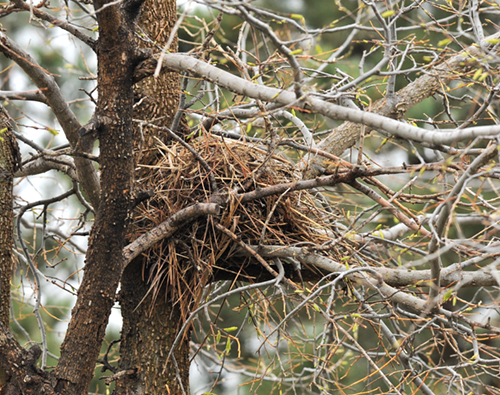 House sparrows use their nests throughout the year. During the spring and summer, they will raise their young in the nest. They will sometimes raise four broods each season in the same nest. During the fall and winter, the nest is used for resting and then roosting at night. Most of the time, nests are found anywhere in trees, birdhouses, buildings, and crevices near humans. These birds love to be near the action. The bad news to some people is that these birds multiply quickly. They nest throughout the year, so they seem to always be partying.

The house sparrow’s nest looks like a perfect sphere. It is about 8 to 10 inches in diameter. Their nests are often made with all sorts of debris and things. Besides trash, they will use straws, leaves, grass, twigs, and paper. The inside is lined with grass or feathers. The house sparrow nest is usually messy and cluttered. They don’t seem to mind it.

The female house sparrow starts to lay her eggs after they start to build the nest. She will uusally lay about four eggs at a time, but this number varies. The female uusally incubates the eggs for about 12 days. After the young hatch, they leave the next about 17 days later.

The baby house sparrows take those first two weeks to fledge. The parents still need to care for them because they cannot feed themselves that first week out of the nest. The male sparrow usually takes charge of the babies and the female starts the process to lay her next clutch of babies. After one set of eggs is hatched, just think: mama is already getting ready to lay another batch! 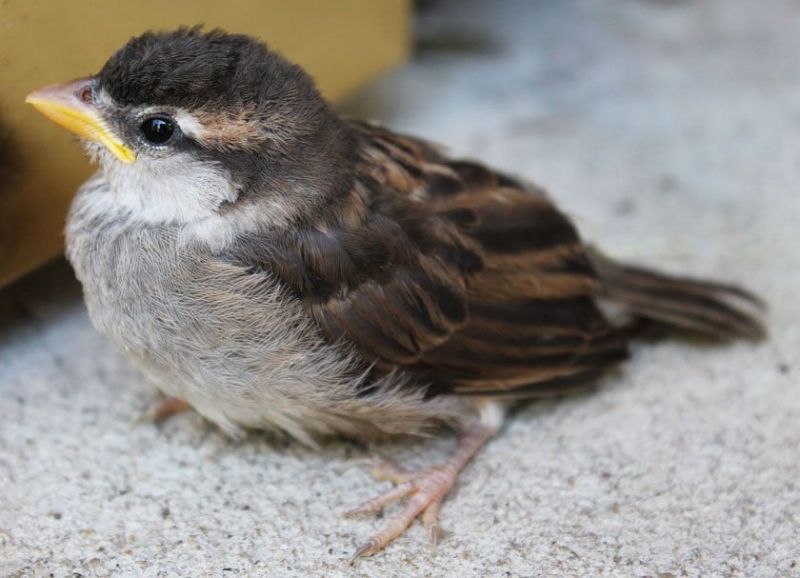 House sparrows might not be the friendliest birds, but they aren’t picky eaters. They love all kinds of seeds. They also love oats, wheat, and corn. They’ll forage on the ground then fly to your feeder for a sweet suet. They also dine on spiders and insects. If you have scraps of food lying around on the ground, they’ll scrape them up as well. They are the garbage disposal system for the bird population.

House sparrows are often at odds with tree swallows, martins, and bluebirds. These native species face losing control of their nests due to the bullies, the house sparrows. This can be a big problem for someone trying to put a purple martin house out or put together a bluebird box. A house sparrow may bully their way in pushing away the other birds in an aggressive fashion. 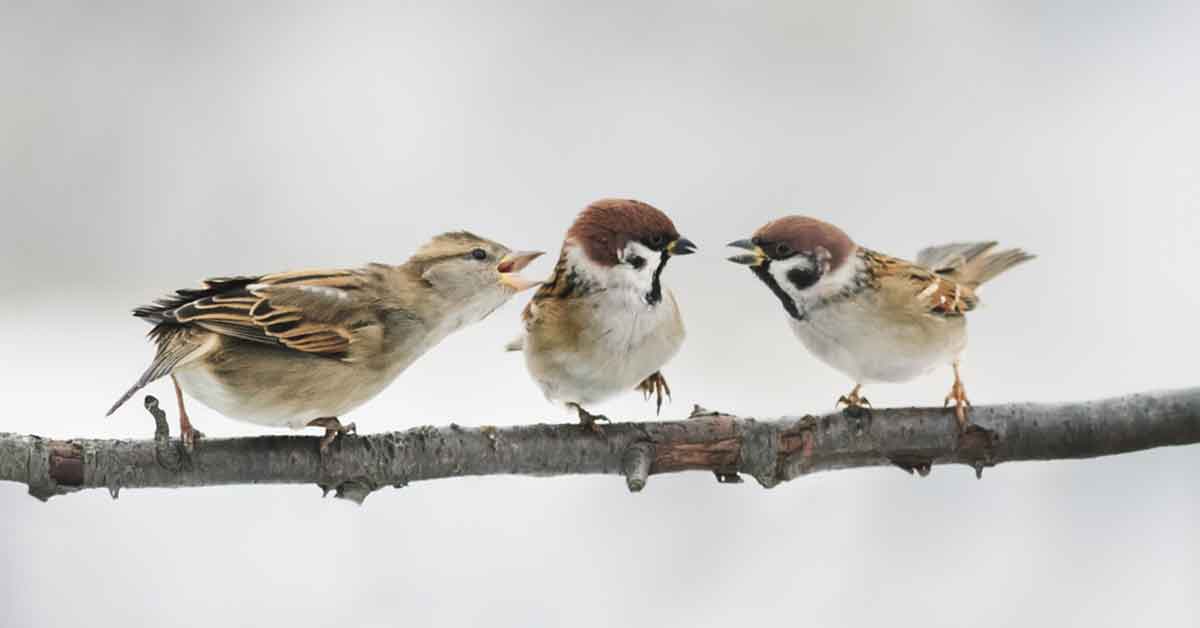 Why House Sparrows Are Aggressive

Some birds simply aren’t friendly. House sparrows were initially imported from England in the opes they would control the population of caterpillars harming the shade trees. The small number of imported birds suddenly spread throughout the United States and Canada. They didn’t attack the caterpillars. For some reason, they decided to go after other birds. Native birds don’t have the evolutionary changes yet to keep up with these aggressive birds.

Not The Only Bully

Though house sparrows are bullies to other native birds, they have their own bigger bullies to face. Coopers, kestrels, and sharp-shinned hawks aren’t their friend. Owls and shrikes are often out to get them. If they aren’t careful, a cat or dog will get into their nest to eat their young, their eggs, or even them as a whole.

One of old two birds that are non-native and not protected by Federal Law in North America, the house sparrow doesn’t have the same rules as most birds in your backyard. Along with the European Starling, there are no laws governing house sparrows. These birds were introduced by other continents. They are predators and naturally aggressive to native nesting birds. House sparrows are so rough they will savagely kill native birds for their nest.

It’s not easy to get a house sparrow to leave your yard. There seem to be a million of them and they enjoy terrorizing other birds. We do have some ways you can successfully attempt to get them out of your yard.

House Sparrows enjoy living near people. They like to pick up trash for their nests and eat food people drop. This means they like to live near you. The best thing to do is eliminate and try to monitor places they may potentially choose as a nesting site. If you spot a house sparrow making a nest, try to remove it as soon as possible. It seems mean, but you’re just keeping other birds safe. You can also install netting so they won’t make a nest in crevices around your home.

One of the biggest problems with house sparrows is they love to take over your backyard feeder. One of the best ways to get rid of them is to set out large amounts of cracked corn about 15 feet away from your bird feeders. House sparrows enjoy cracked corn for dinner more than anything. It’s one of the cheapest foods you can buy by weight.

In conclusion, there will probably come a time when you see a ratty nest with a house sparrow’s eggs. Though these birds can be annoying, usually they are just trying to live and survive like every other bird. House sparrows are a bird that aren’t going anywhere. It’s probably best for most people to learn to live with them. Instead of getting mad at them every time they’re in your backyard, appreciate the entertainment they bring each day.