A farmer runs his trusty tractor through an open field preparing the soil for a new season of crops. Soon the barn swallows will come. They’ll build their nests in the barn rafters and fly low over the newly plowed fields searching for the insects his machinery has disturbed. Are these birds his friends or his foes? In this article we dive into the proverbial barn swallow’s nest and learn more about these critters and where they like to call home.

Farmers tend to like barn swallows as they feast on insects that might otherwise harm their crops. Barn swallows love ants, mosquitos, beetles, butterflies, and grasshoppers. But these pretty little birds can also be annoying, building their nests in areas that encroach on our own human habitats. Why can’t they just move into old woodpecker holes in trees like other birds? 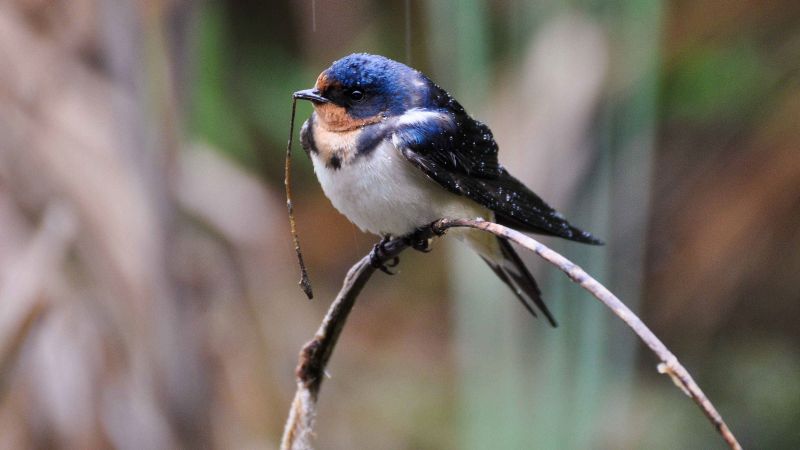 Modern day barn swallows nest under the eaves of barns and stables, under bridges, and in culverts–virtually anywhere where they might find a vertical wall and overhang or ceiling. But they didn’t always build their homes in human-made locations.

There was a time when barn swallows nested in caves, and one wonders what they were called then. Cave swallows, perhaps? The only North American barn swallows that still make their homes in such locales are those that live in the Channel Islands off the coast of California.

Barn swallows also have a good working relationship with osprey, a species of bird that dines exclusively on fish and is therefore not a threat. Swallows will often build their nests directly below the larger osprey nests, substituting those nests for the overhangs provided in human-made settings. These bigger birds provide protection to barn swallows from other birds of prey, and all the swallows have to do is scream for help.

Despite their affinity for osprey, however, for one reason or another, barn swallows have also become increasingly comfortable living in close proximity to human beings. Certainly our activities provide ample housing choices and foraging opportunities. And when their populations need to be protected as they currently are in the United States and Canada by the Migratory Bird Treaty Act of 1918, we go out of our way to make life easier for them.

So they have to put up with us watching them all the time. It’s really not that bad a trade-off.

How to Identify Barn Swallow Nests

Perhaps you’ve seen these pretty little passerine birds flying in and out of an open barn or shed. You’ll recognize the approximately 6-1/2-inch long barn swallow (scientific name Hirundo rustic) by its reddish face and throat, it’s glossy, cobalt blue upperparts and breast band (more prominent on the male of the species), and its buff undersides. Barn swallows also have long outer tail feathers that give its tail a distinct forked appearance.

If you check inside the barn, you may find a nest or perhaps several under eaves, rafters, or cross beams. Cup-shaped, the nests are fashioned from pellets made of mud and grass they shape with their bills. A completed nest may be made up of 1,000 individual mud pellets.

The pellet nests are typically built on horizontal ledges or beams and affixed to rough vertical wood surfaces of barns and other structures. Each pellet is stuck to the rough vertical surface as well as to each other to form the hard outer shell of the nest. The inner cup is typically lined with grass, hair, and feathers. Each nest will eventually hold two to seven eggs. 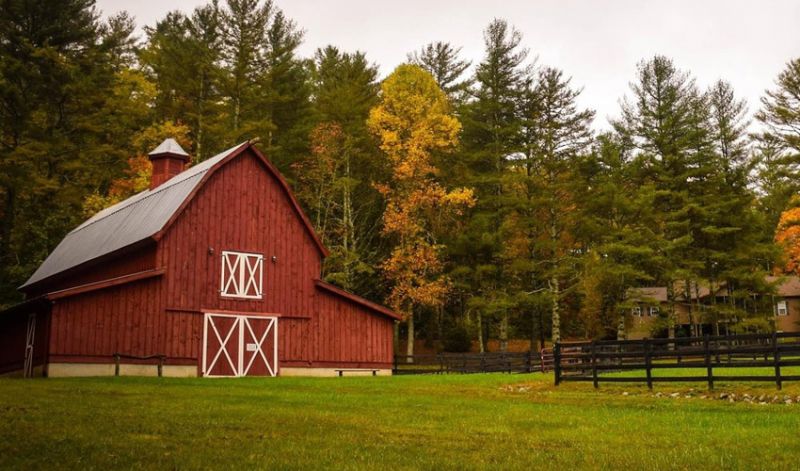 Beyond building their homes in barns and stables–and, unfortunately, sometimes in your garage, under your front porch or blocking vents around other parts of your home–barn swallows nest in areas where there is sufficient habitat.

And that means no abandoned woodpecker holes for these birds! In fact, barn swallows avoid densely wooded areas preferring instead to spend their time in open pastures, fields, and farmland where they can fly and swoop freely to capture their prey. They also require lakes, ponds, and other open bodies of water as they will catch a drink of water or take a quick bath while in flight.

No, we are not segueing here to discuss the Vanderbuilts and Rockefellers, even those of the bird world. Rather, we are taking a look at whether barn swallows prefer to build their nests in close proximity to other pairs.

For the record, barn swallows are not averse to nesting near other birds of the same feather, and colony sizes can include up to 200 breeding pairs. Most colonies fall in the 9 to 35 pair range, but being territorial types, they prefer a space of at least four to six meters between each other.

A 2011 study, however, published by the American Ornithologists Union found that by creating visual obstructions between active nests, barn swallow pairs will allow themselves to live in closer quarters. Out of sight, out of mind as they say. It’s a bit like drawing your shades between your house and your very close neighbor next door.

Bird species that breed in colonies tend to do so for certain benefits. These may include collective foraging strategies or for greater protection against predators. Some birds will help other pairs build nests or care for their young.

Studies have found that this is not so much the case with barn swallows. Rather, they do so as a result of there being limited nesting sites. An opportunistic species, older males and unpaired males will use the communal setting to their advantage to get in some extra-pair mating opportunities. They are also not above attacking and destroying the eggs or nestlings in nearby nests as that will bust up mating pairs and increase their mating opportunities. 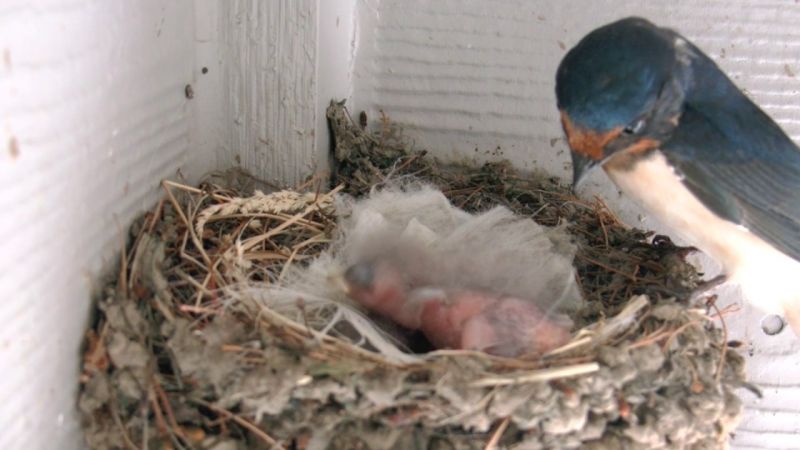 As a general rule, after barn swallows are fledged they tend to return to the nesting site where they first came into the world. This natal philopatry often occurs even when old nests have been removed from a site.

About 45 to 85 percent of pairs that have successfully raised a brood will reuse their old nests if they are still available and free of parasites. (Barn swallows are notorious hosts for disease-carrying parasites, a subject we’ll delve further into later.) By avoiding spending time on new construction, the strategy allows pairs to get a jump on the breeding process. Eggs will be laid earlier and brood sizes are larger.

When Do Barn Swallows Nest?

Barn swallows are a widely dispersed species, and as a result their breeding season can vary slightly by climate. A migratory bird, they winter in the southern hemisphere and return north in the spring.

Nest building is a shared responsibility which pairs will begin on in late March or in April. A typical clutch of 3 to 5 eggs will be incubated by both parents as well, and they will hatch in 12 to 17 days. Both parents also bring food to their young, and even sometimes an older bird from a pair’s previous clutch may come around to assist. Young barn swallows fledge the nest in 20 to 25 days but will remain close by for several weeks afterward. Some pairs will raise a second clutch in a single breeding season.

Not every brood will make it to adulthood. Predators like hawks and owls, raccoons, weasels, as well as free-roaming cats will often destroy eggs or kill young. (And, of course, there are the unpaired males to watch out for!) Sometimes also, particularly rainy weather may cause a nest to break away from a beam it is attached to and cause the nest to fall.

Barn swallows are active, acrobatic little birds and a delight to observe in flight. Their nests, however, can be problematic at times for homeowners. In some cases their construction in front of vents can block ducts and cause fires or ventilation issues.

Droppings can also cause serious consternation. Nestlings aren’t the best houseguests as they quickly learn to defecate over the sides of their nests leaving them to accumulate on homeowners’ decks and porches below. The loud cries barn swallows make isn’t always appreciated either.

Additionally, and as noted earlier, barn swallows often seem to bring with them a variety of mites, fleas, ticks as well as avian lice. Most of these parasites are brought in with their nesting materials and as may often be the case, they will abandon nests if they become overwhelming. As a result, homeowners may be left with an infestation of parasites that can spread disease.

Because barn swallows are protected by law, however, it is illegal to disrupt, disperse or kill this migratory bird. You can prevent pairs from building nests in your garage by keeping the doors closed, and you can fill in cracks and openings on the outside of your home to prevent them from building nests.

Chicken wire, bird netting, reflective tape, and strategically placed owl decoys are also useful tools to keep barn swallows away. Keeping your lawn cut short and free of debris to limit the number of insects that they feed on is also a useful strategy. However, if you find an active barn swallows nest in an undesirable area, under the law you cannot remove it until after the birds have left completely.

Are You an Up-And-Coming Architect?

Like other birds in the swallow family–purple martins come to mind here–barn swallows have proven quite open to accepting housing made by humans. Some bird lovers will put up these human-made structures to attract barn swallows to their yard, while others will do so specifically to attract the birds to other areas away from their own abode.

In Ontario, Canada, any persons who would alter, modify or demolish a structure that provided habitat for barn swallows must follow very specific rules to create alternative housing for the birds. It’s the law.

Whatever the motivation may be for building alternative housing, it is easy enough to entice barn swallows to nest. Artificial, cup-like homes can be made from wood, clay or concrete and attached to a wood backing. Best results can be had by following these basic rules:

So There You Have It

Barn swallows are amazing and beautiful birds that fill an important role in insect control, and farmers are behooved to avoid using insecticides that can diminish their populations. But birds, being birds, they don’t always make the best houseguests.

Fortunately, there are ways to guide them to nest elsewhere but still close by to enjoy their enticing, aerial flights.