If you ever get the chance to peer into the eyes of a bird, you will see splendid colors. Ranging from light to dark, you will see yellows, oranges, whites, greens, browns, and reds. Since birds do not have whites around their irises like humans, a bird’s eye color really pops. In this article, we’re taking a closer look at what birds have red eyes and learn a little more about them.

While a particular eye color isn’t tied to any one group of birds, there is a common coming-of-age pattern noted for some birds. Often the change in eye color for some birds will signify the onset of adulthood. Although we could talk about all the birds with beautiful eyes, below we are going to explore birds that have red eyes.

What Birds Have Red Eyes? 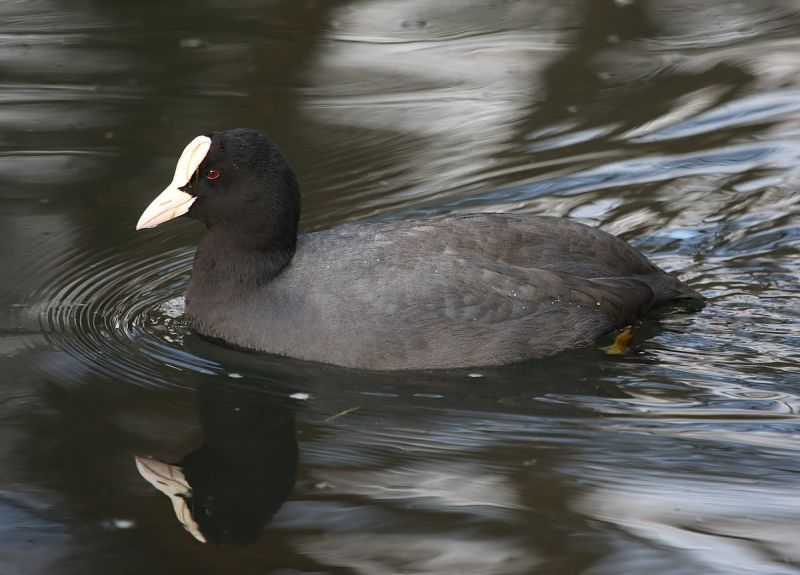 Often mistaken for a duck, the American coot is a rails. This chicken-like bird is small, bigger than a robin but smaller than a crow. Its tiny tail and short wings are paired with its large feet that can be seen when taking flight, which is rare.

They are gray all over with blacker heads and white bills. American coots can be found in ponds and marshes all over the U.S. and Canada. Some have even been spotted as far as northern South America. 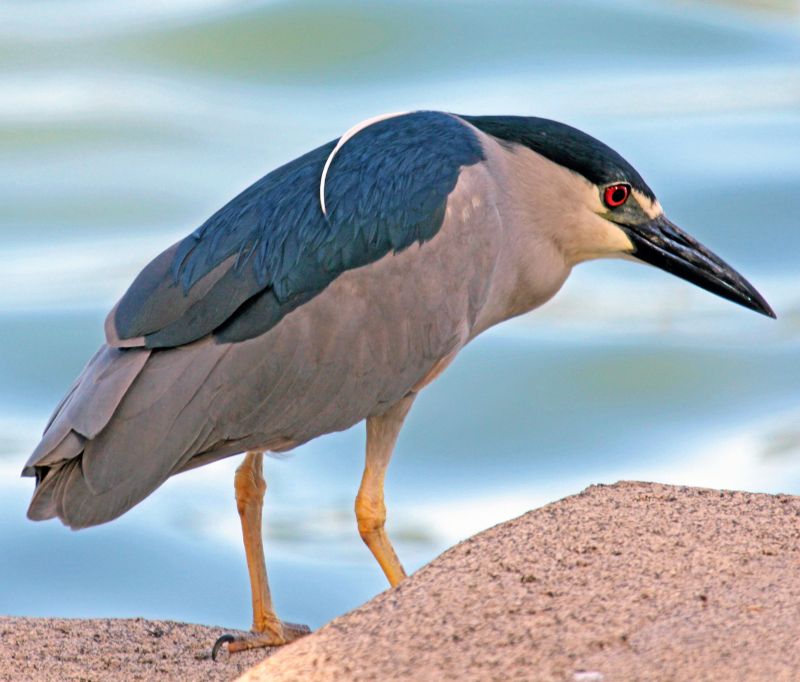 Compared to other herons, the Black-crowned is stocky and active mostly at night, as its name implies. During the day, they are very lethargic and inactive. They are white with black crowns and backs that always seem to look hunched.

These birds are larger than a crow but smaller than a goose and forage in mudflats and on land. They are commonly found across North American wetlands, including streams, lakes, marshes, and reservoirs. 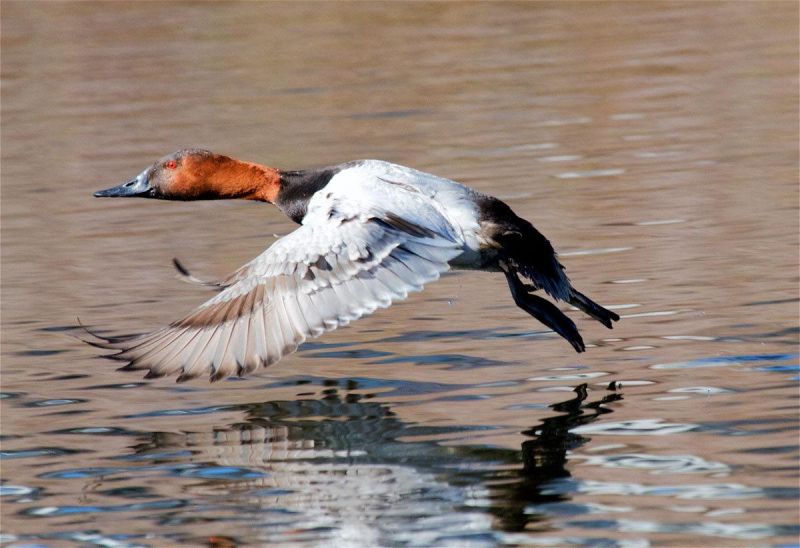 With their big brown heads, black chests, and white bodies, Canvasbacks are diving ducks. The males have distinctive red eyes, whereas females have brown. This duck is bigger than a crow but smaller than a goose.

The canvasback loves diving in deep water bays, ponds, lakes, and marshes all across North America. When breeding, they tend to stay in the northern parts of the U.S. and Canada. During the nonbreeding season, they can be seen all through the U.S. and Mexico. 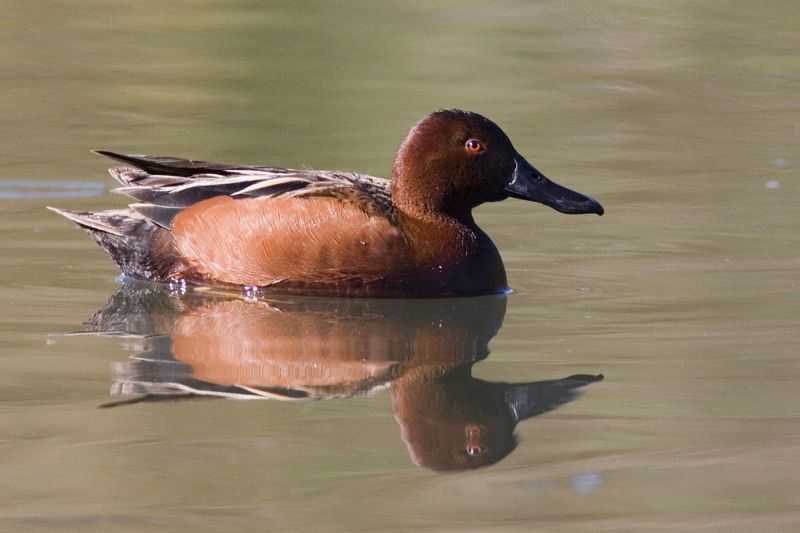 The male Cinnamon teal is a deep rich reddish-brown, hence its name. Its long black bill and back make this duck very easy to spot gliding across the water. They are a relatively small duck that inhabits freshwater mangrove swamps, reservoirs, and estuaries.

The Cinnamon teal stays to the west of North America. Spending most of its nonbreeding season in Mexico. When breeding, it will stay in the U.S., but some do venture into western Canada.

Found year-round in the forests of the U.S., the Cooper’s Hawk has a dusty brown and white breast with a black back and crown. This hawk feasts on other birds and are skillful fliers.

The Cooper’s Hawk is stealthy and has a distinct flap, flap, glide flight pattern. They make their nests high in the canopies of trees. They frequent birdfeeders, snatching up smaller birds for food. 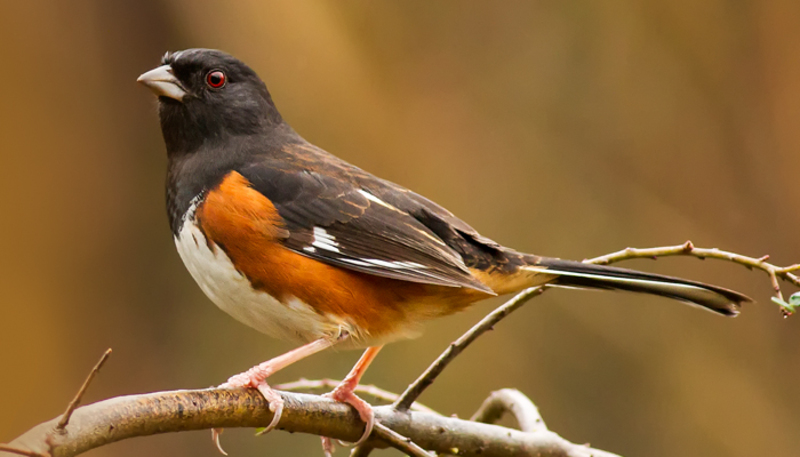 This oversized sparrow is found in the eastern U.S. with bold black and reddish-brown colorings. Eastern Towhees are always rummaging about in the brush and are hard to spot.

This bird is similar to the Spotted Towhee making their homes in the underbrush of forests, thickets, and uncut fields. Once, they were considered the same species. Eastern Towhees are solitary birds and will carry out displays of threats to other birds to keep them away. 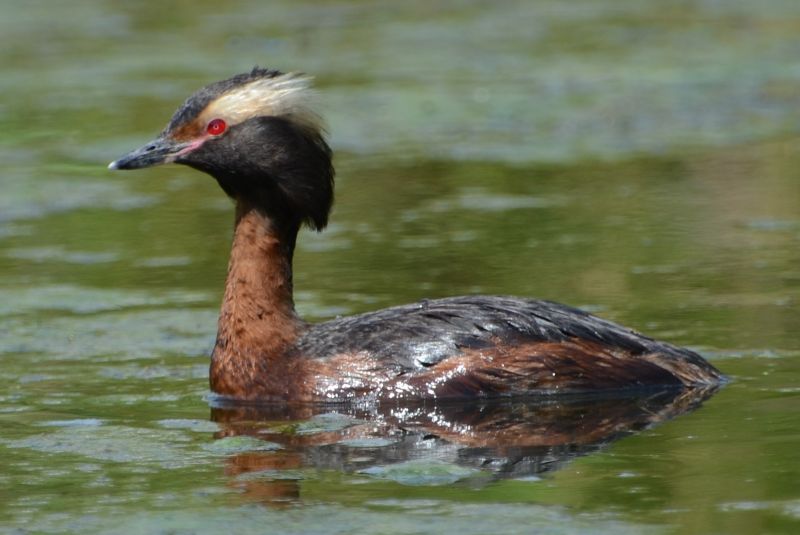 This striking grebe has a gray and black head with a strike of yellow and orange colorings on its head, which gives it its horns. Their reddish-brown bodies are seen in freshwater across North America in April and October.

Smaller than a crow but bigger than a robin, the Horned Grebe is a small compact waterbird. They do brief dives for food on freshwater lakes, ponds, bays, and rivers with their narrow bill. 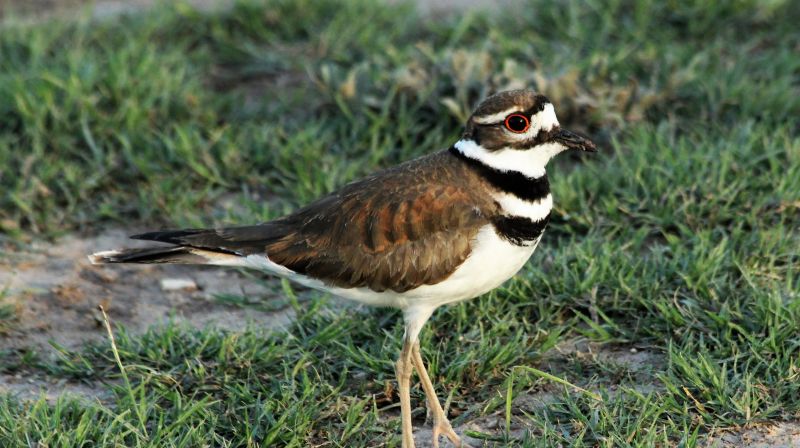 The Killdeer is a shorebird found all over North America. When breeding, they will migrate to the Northern U.S. and Canada, but those that are nonbreeding will be found year-round in Mexico and the U.S.

Although a shorebird, the Killdeer can be found in yards, golf courses, parking lots, and other urban areas. They have a black-white striped head and upper chest with light brown backs and white undersides. These robin-sized birds spend a lot of their time walking on the ground foraging for food. 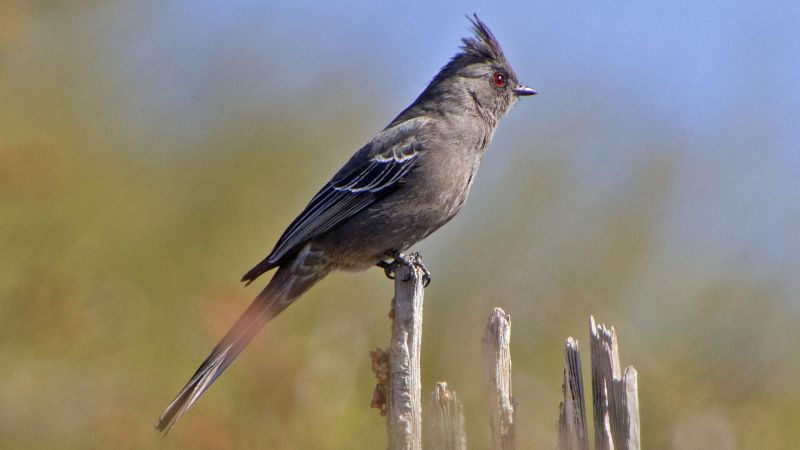 This sleek all-black bird is found in the Southwestern parts of the US and Mexico. They inhabit the scrub and forage for fruit. The Phainopepla is smaller than a robin but bigger than a sparrow. Adult males are glossy black, whereas the females have a subdued grayish-brown coloring.

The Phainopepla is very territorial and will perch for long periods of time, standing guard for intruders. Often they will nest in small colonies and, after breeding, will form large flocks. This bird will spend most of its winter in the lower elevations in deserts, but it will go to higher elevations during warmer months. 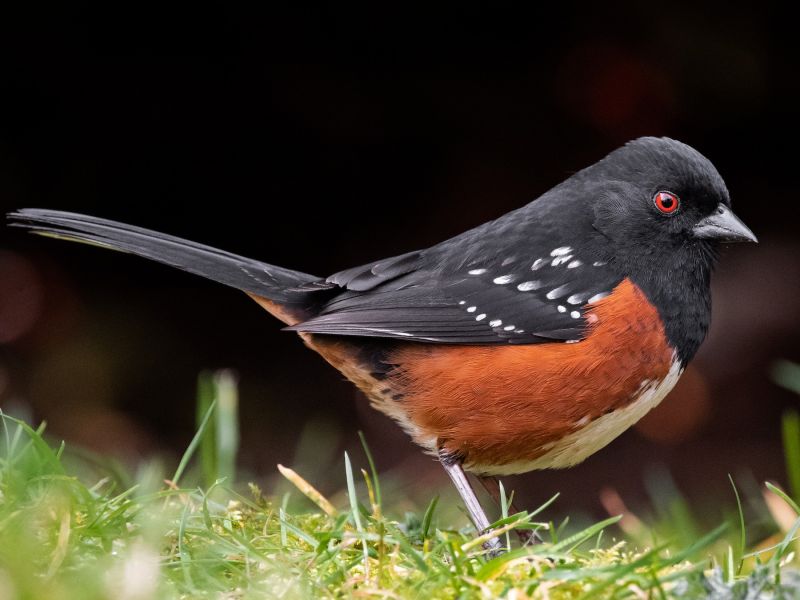 This large sparrow has a short, thick, pointed bill with a black back and head and reddish underside. Their spots are white and seen in their wings. The Spotted Towhee can be seen hopping over the ground and under scrub brush. Although on the ground quite a bit, the Towhee can fly long distances.

This bird is found in open shrubby habitats, backyards, the edges of forests, and in overgrown fields. The Spotted Towhee is found in the western U.S., Mexico, and in a small part of Canada. 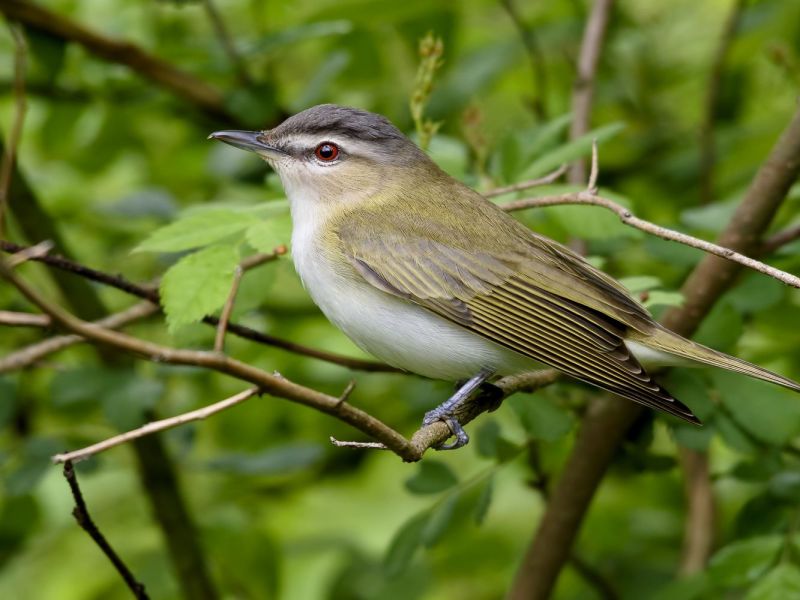 The Red-eyed Vireo is quite the songbird. This bird has a unique pale greenish coloring and is found in Eastern forests during the summer. When autumn approaches, they head to the Amazon basin to pluck insects from the trees.

Their songs are constant, sometimes numbering 20,000 a day. This sparrow-sized bird is hard to spot in the green leaves of deciduous trees. They forage for caterpillars and other insects in the trees, where they also make their nests. 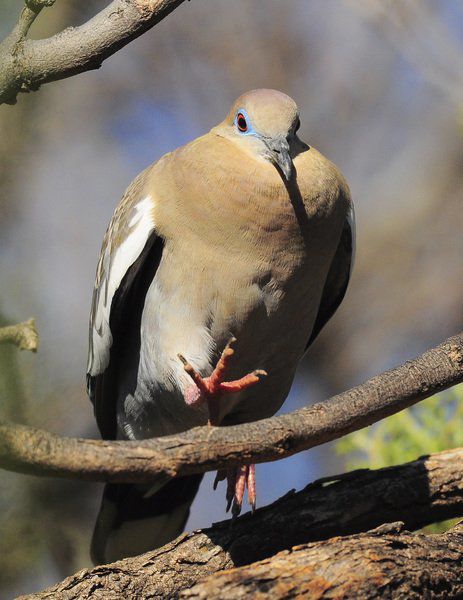 The White-winged dove has become a common sight in cities and towns. Although they originally were found among desert thickets, this bird can be seen all over the U.S. These doves are plump and robin-sized with brownish-gray plumage and gray underside. Their faces have black markings on their cheeks and blue skin around their red beady eyes.

White-winged doves will forage on seeds and grass on the ground or move to the trees to feast on berries. In the Sonoran desert, they eat saguaro cactus fruit. These birds will flock together in large groups when traveling between foraging and roosting spots. 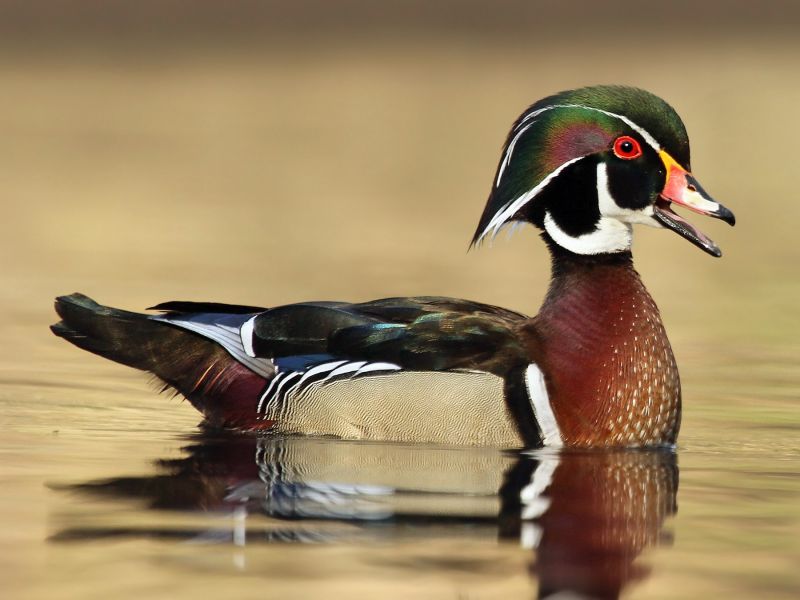 This duck has a well-known look captured in paintings and in photos. The Wood duck is a stunning waterfowl with iridescent green heads and chestnut plumage. These ducks live in wooded swamps in tree holes. The Wood duck has strong claws to help them grip tree bark for perching on branches.

This duck likes to feast on plants around the edges of swamps, streams, and overgrown ponds. They are found all over the U.S. (more east than west), Mexico, and a little in Canada.

There are several other birds that have red eyes, and they are: