We all know birds of a feather flock together, but how long do the couples among them remain a pair? Are there any bird species that actually mate for life?

Actually, there are. Mute swans, bald and golden eagles, loons, osprey, various geese, black vultures, puffins, barn owls, and some penguins. These are all birds that tend to mate for life. But while it may make us feel all warm and gushy inside to think of these pairs in romantic terms, their choice to stay in committed relationships is really more a matter of practicality.

So what do these birds have in common?

For the most part, they’re larger types that tend to produce only one brood of chicks a season. It takes a lot of time and energy to woo a mate, so with a partner already on standby, these species can get started breeding earlier in the season. This is particularly helpful as their clutches tend to have longer incubation periods, and their young take longer to fledge the nest.

Another big plus to staying with a proven mate is that they get better at raising each successive brood they have together. As a result, their offspring have a better chance of making it to adulthood and someday raising broods of their own.

It’s important to remember, however, that a bird’s notion of monogamy is a bit different than ours. But we’ll get into that a little later. First, let’s take a quick look at a handful of these long-term lovers. 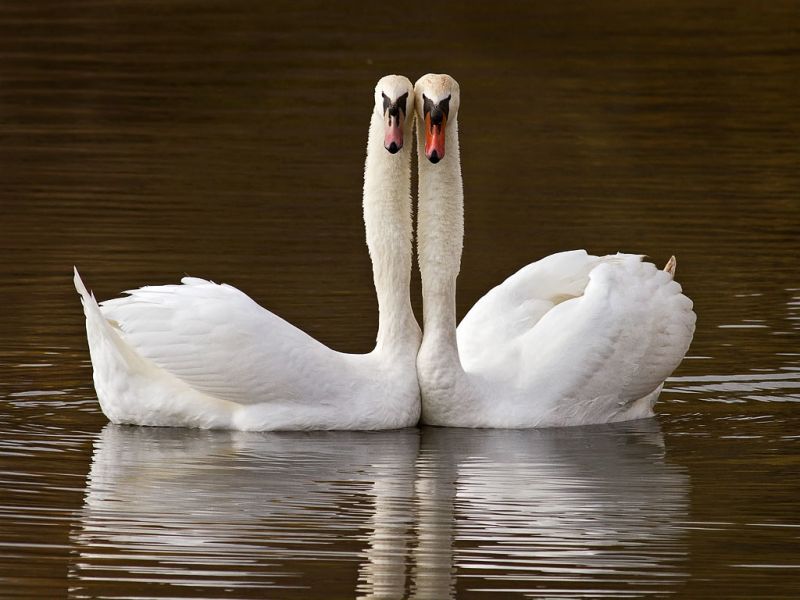 Mute Swans: Till Death Do They Part

Ah… a pair of canoodling swans. Their classic courtship ritual of drawing their lowered heads together, their heads and necks forming a perfectly-shaped heart, has become the quintessential wedding cake topper. When we think of these pairs, our hearts go all aflutter.

But though we may never completely understand their feelings for one another, the mute swan’s choice to stay with the same mate is less about romance than it is a strategic decision. These birds mate for life because it gives them an evolutionary advantage.

Swans are compelled to produce as many cygnets, otherwise known as baby swans, as possible in their lifetimes and to have a proven successful mate is worth its weight in gold. Swans who pair unsuccessfully will often leave one another to find someone new, and the whole mate-finding and courtship process can take one to two seasons. That’s time they can’t get back.

Additionally, pairs will stay together for defense purposes as lone birds don’t often fare as well in attacks.

Often when one half of a mated pair of swans dies, the remaining bird will retreat into isolation. Is it suffering from a broken heart? It could be. Swans also tend to be territorial, so a swan may retreat because it knows instinctively that finding a new mate will be difficult. 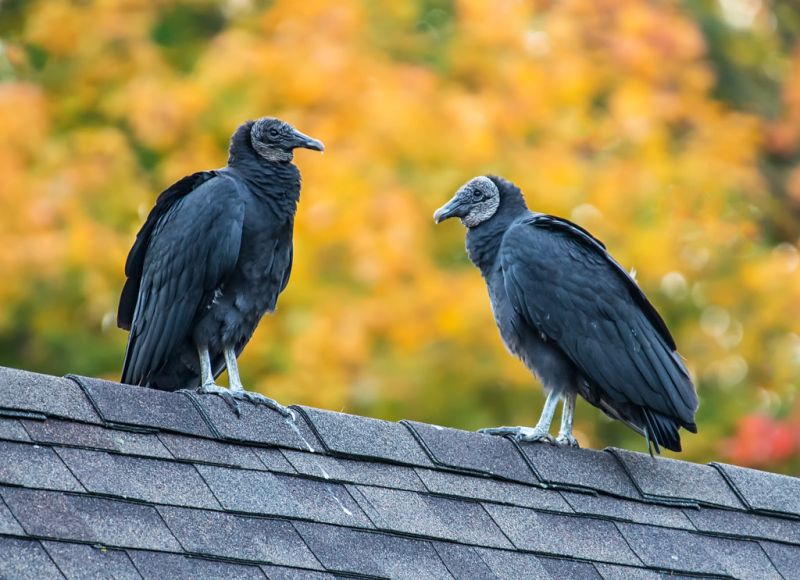 Black Vultures: A Love That Is More Than Feather Deep

Black vultures aren’t the prettiest of birds that mate for life. Some might even say they’re downright ugly. And the fact that they feast on dead animals and birds doesn’t make them any more attractive.

Still, once they choose a mate, they tend to stay by each other’s side for life, each sharing in the incubation of their one to two eggs in a brood. Once their young hatch, they also share in feedings which can last up to eight months. Family-oriented and social by nature, it is common for black vultures to forage in groups with young birds joining their parents even after they’ve fledged their nests. 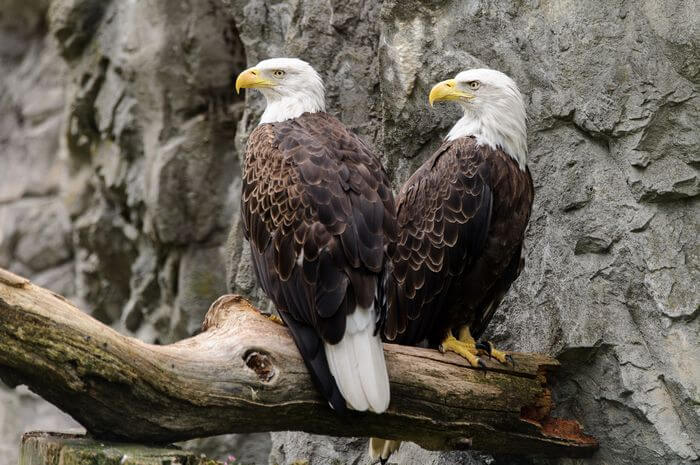 Both species can live up to 30 years in the wild, and once they find partners will stay with them for life. Both have just one brood a season. They also use the same nest from year to year if their previous brood was successful.

A female bald eagle incubates her clutch of one to three eggs for about 35 days, and her babies will fledge the nest at between 10 and 12 weeks. A golden eagle female will lay one to four eggs and incubate them for 40 to 45 days, the young fledging at between 7 and 11 weeks.

Compare that to the common American robin that can have two to three broods per season. These prolific birds incubate their clutch of eggs for only 12 to 14 days and send their babies packing two weeks later.

From a practical point of view, bald and golden eagles’ greater investment of time in producing and nurturing their young is an important reason why these birds tend to mate for life. 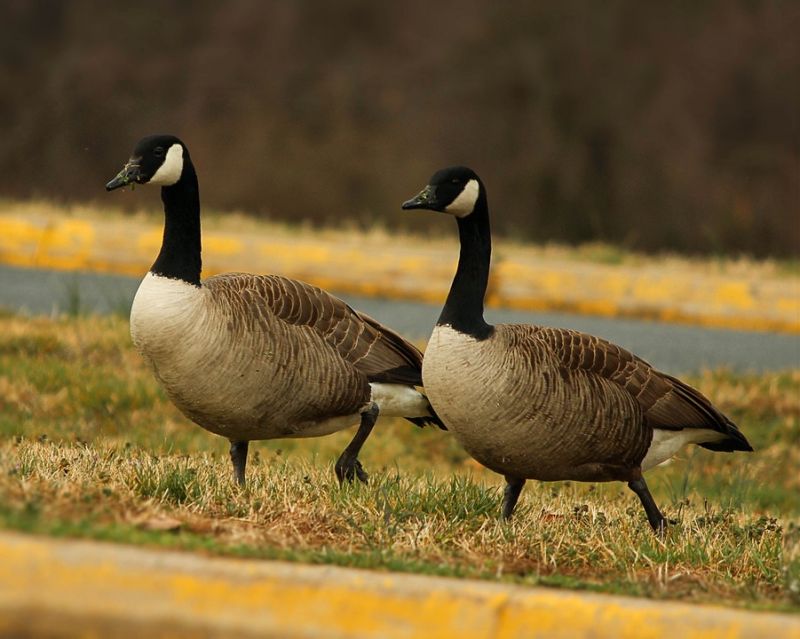 If you live in North American you’ve probably seen the familiar v-shaped formation of a flock of Canadian geese as they are migrating south in the fall. A social species, they are also loyal to a fault.

Canadian geese, like all species of geese, mate for life, probably a good thing as they don’t tend to get into the dating game right away. These birds reach full maturity at about two years of age, but don’t take a mate until they are four.

Both males and females share duties in raising their young, and while they don’t tend to “cheat” on their partners, researchers have found instances of extra-pair copulations as well as occasional “divorces.”

Perhaps the most touching behavior observed in geese is their tendency to mourn the loss of a partner who has died. Often the surviving partner will go off to be alone for a while. In time they may take a new mate.

Smaller Birds That Mate for Life

While most long-time lovers tend to be larger birds, pigeons and Carolina wrens are two notable exceptions.

It’s hard to say why they choose to stay with a single partner and remain for the most part monogamous. They don’t seem to fit the mold that makes it practical for other species of birds to stay with one partner. For example, pigeons are known to breed as many as eight times a year with the same mate.

Whatever the reason, however, both choose to remain with a single partner, separating only if they are unable as a couple to produce eggs.

Both birds go through an elaborate courting process. Male pigeons will put on a show and strut their stuff before a desirable female. If they “bill” each other, a ritual that appears much like an exchange of kisses, a match has been made and they’ll start a new life together.

Pigeon clutches tend to include just one or two eggs, sometimes three. Both males and females share in the incubation of the eggs which will hatch after 18 days. Young birds leave the nest after about a month.

Just 5.5 inches in length and weighing less than 20 grams, Carolina wrens don’t fit the description of most long-time lovers. These birds may pair any time of year and not just during the breeding season. They typically have two broods per season and sometimes three in the southern United States. Incubation is typically 12 to 16 days in length with fledglings leaving the nest after 12 to 14 days.

A Bird’s Version of Monogamy

The vast majority of bird species–about 90 percent–are socially monogamous, meaning they take only one mate at a time. They’ll also work together to incubate and feed their young.

But that doesn’t mean both birds in the pair can claim with certainty the babies they spend time raising together are theirs. It’s not uncommon for these birds to have extra-curricular activities that lead to half-siblings in the nest. The good thing is the attending parents don’t hold it against the baby birds.

Some socially monogamous birds will stay a breeding season, others, like, for example, paired black-capped chickadees, for multiple seasons. However, most at some point will fly the coop in search of someone new. Unlike their human counterparts, neither partner takes the abandonment as a personal afront.

In addition to social monogamy, bird species may practice genetic monogamy. Birds are considered genetically monogamous if all of the nestlings produced have the same two parents.

Unlike humans who tend to place a much higher value on fidelity, birds, depending on the species, have different expectations of their mates.

The eastern bluebird is a good example. A socially monogamous species, about 95 percent of mated pairs will remain together for life. But that doesn’t mean both males and females won’t have their own dalliances.

Non-migratory bluebirds don’t tend to have a lot of interaction with their partners after the breeding season, but they nevertheless tend to pair up with the same sweeties from the previous year when the season rolls around again.

In the case of migratory bluebirds, they’ll often arrive at their breeding grounds already paired. If not, they’ll find mates soon after.

But just because they show up together, doesn’t mean they’ve made a firm commitment. Males will demonstrate their interest by flying in and showering their objects of attention with gifts. No, they don’t bring jewelry but rather nesting material for the cavity in which they’d like to settle down and raise a family. They’ll also bring gifts of food. If the female likes what she sees and starts helping with the nest building, she is signaling that a match has been made.

A male bluebird, however, will sometimes “break up” with his girlfriend, demonstrating his lost interest by rejecting and removing the nesting material she had previously brought in.

It’s during the nest-building period that eastern bluebirds also begin copulating in an effort to start a family. You’d think they’d be too busy with the work they have to do to stray, but genetic studies have found that 20 to 30 percent of bluebird nestlings have more than one father.

Despite their lovely color, it’s clear that both male and female bluebirds aren’t necessarily true blue. And this happens despite the male birds’ concerted efforts to prevent their partners from behaving promiscuously. They apparently want to ensure they are the ones to sire the broods they help to raise.

The mating behaviors of eastern bluebirds, however, likely has far more to do with the perpetuation of the species than it does with true love. Ornithologists have found that pairs that succeed in their first nesting attempts tend to re-nest together the following season. But of those pairs that fail, only about 30 to 50 percent give it another go. Additionally, if one partner dies, they don’t waste time grieving. The remaining one will find a new partner often in a matter of hours.

Bluebirds aren’t the only songbirds that cheat. In fact, in a study of 100 different species of songbirds, it was found that 75 percent have extra-pair paternity.

Further complicating the matter, it’s also fairly common for some songbird females to deposit an egg sired by her bonded mate in another bird of the same species’ nest.

Wouldn’t you like to be a fly on the tree trunk when the unsuspecting female bird tries to explain that occurrence to her mate?

But before you start blaming them for their conniving ways, it’s important to understand that songbirds’ choice to have multiple partners helps ensure they produce offspring with varying sets of genes that will better equip them to survive in a changing environment.

The argument works well for songbirds. For humans? Not so much.

Anyone who has ever been in a long-term relationship knows that love can be complicated. Work, friendships, interests–not to mention politics!–can get in the way.

Birds that mate for life, however, are usually more practical sorts. Relationships are forged and sustained to make life easier and to help ensure that their genes are passed on.

Still, when you see a lone goose who has recently lost its mate retreat into isolation, one can’t help but think he is nurturing a broken heart.