You know it’s spring when the red, red robin comes bob, bob, bobbin’ along. Largely a migratory bird, the American Robin, common throughout the North American continent, is one of the first species of birds to lay its eggs. A female may have two and sometimes three clutches of three to four eggs each in a season. The first hatchling in a brood will typically appear 12 to 14 days after the mother bird has laid her last egg. And once those babies are born, they make sure they keep mama and papa bird hopping. So the question is, what do baby robins like to eat? Read on, and find out! 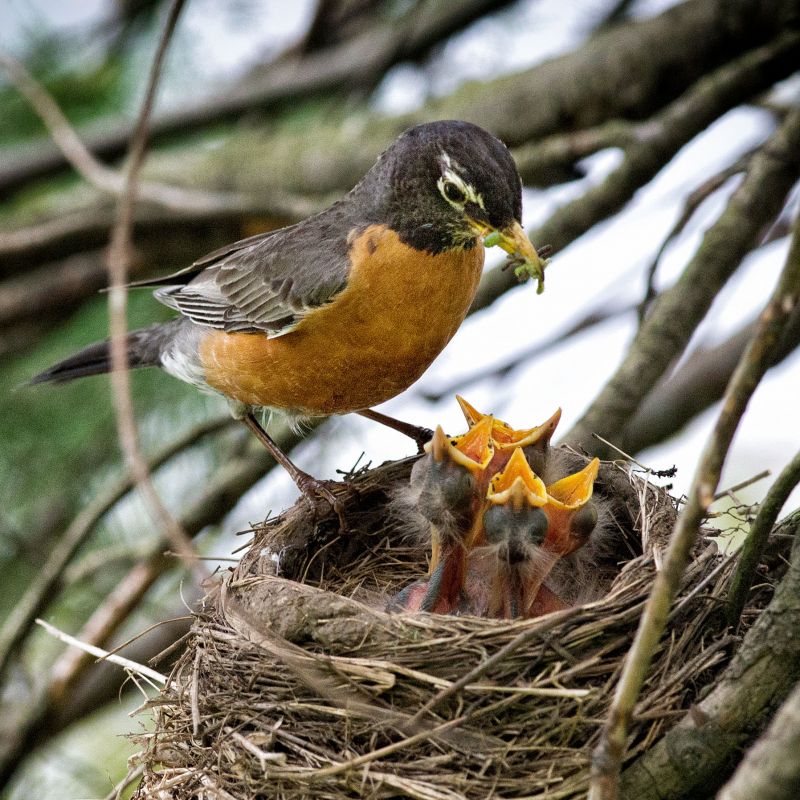 So What Do Newborn Robins Eat?

If you don’t know what baby robins eat, the short answer is: A lot! So it’s a good thing both mother and father share in feeding duties.

Baby robins are altricial, meaning they are born helpless and completely dependent on their parents. But things move pretty quickly in a young robin’s life, so much so they’re typically ready to leave the nest after 14 to 16 days.

In the meantime, these nestlings are quite demanding little creatures. In those first four days under their parents’ proverbial thumbs, mama and papa bird will eat and regurgitate partially-digested food directly into the open mouths of their young ones. As robins are omnivorous, this regurgitated food may include a well-rounded diet of earthworms, grubs, mealworms, insects, fruits, and berries.

Sure, it sounds unappetizing to you and me, but baby robins gobble it up readily, and usually by day five, they are ready to graduate to solid foods such as chopped up pieces of earthworms.

Come to think of it, that doesn’t sound much better.

How Often Are Baby Robins Fed?

Mother and father birds need to feed their babies every ten minutes or so, which means in the course of a day they can make as many as 100 to 150 trips back and forth to the nest. Needless to say, their lives for those first couple of weeks are totally consumed with finding food for their babies to consume.

And to think we humans gripe if we have to make more than one trip to the grocery store in a week!

Being altricial, the eyes of baby robins aren’t open when they are born. They also hatch from their eggs featherless. Nestlings eyes won’t open until about day five, but they will soon begin to recognize their parents by their chirpy songs. More importantly, when they feel the bounce their parents make on the edge of the nest or feel a shadow pass over them on a sunny day, it signals them that their food has arrived and they should tip up their heads and open their mouths wide to be fed.

It’s a wonder with so many feedings that they don’t get sore necks. 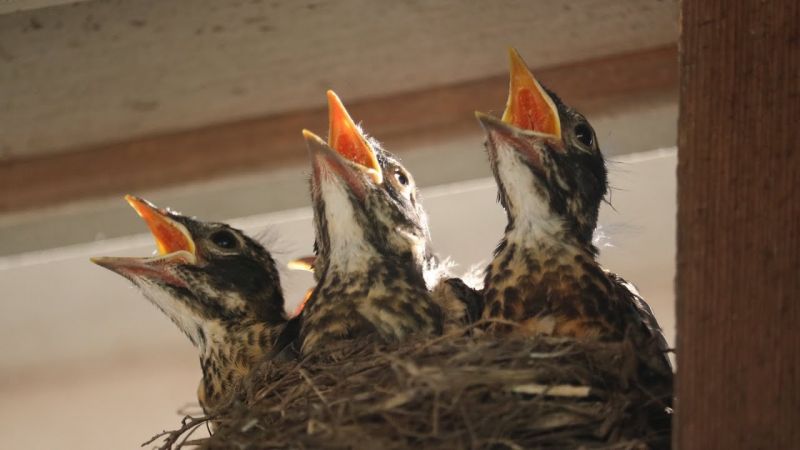 What Baby Robins Eat After the First Week

Babies won’t be ready for at least another week to even try to leave the nest, so they have to settle for what mother and father bring them.

Once baby robins move on to solid foods, their parents will bring them larger bits of the same foods they fed them in regurgitated form–earthworms, mealworms, full-size insects like grasshoppers, crickets, and beetles, as well as berries and seeds.

Perhaps knowing that they will need to do a lot of foraging for their young, robins build their nests in areas where food is plentiful. They don’t generally eat from bird feeders, but they are classic “early birds” often spotted hopping about on wet lawns after rainstorms and pulling up earthworms. And while they rely heavily on eyesight for finding worms and other food sources, studies have found that robins are actually alerted to earthworms when they hear them moving about in the ground.

However they find them, parents do gather a lot of earthworms. And that’s a good thing because as their babies continue to grow, it’s only a matter of days before they are consuming full-sized portions of this protein-rich chow. In fact, during the brief two weeks they live in the nest with their parents, baby robins can consume the equivalent of 14 feet of earthworms!

But perhaps that is simply preparation for adulthood. Believe it or not, as adults robins are known to consume as much as 14 feet of earthworms in a single day.

Like all good parents, robins know the time will come when their babies become fledglings and be ready to leave the nest. And so they adjust their feeding routines to prepare them for the day.

By day 14 mother and father birds will no longer drop food in their offsprings’ mouths but will leave it instead in the nest for them to find on their own.

At this point, baby birds, now considered fledglings, will be covered in down and their first set of feathers will have begun to grow in. Having been fed well, they should be about the same size as their parents. This is when they will begin developing their wing muscles and making albeit awkward attempts at flying.

For the next few days, mother and father bird will shadow their young fledglings and continue to help with their feeding. But that lasts only a short time. Soon they will leave to start another brood.

They grow up so fast. 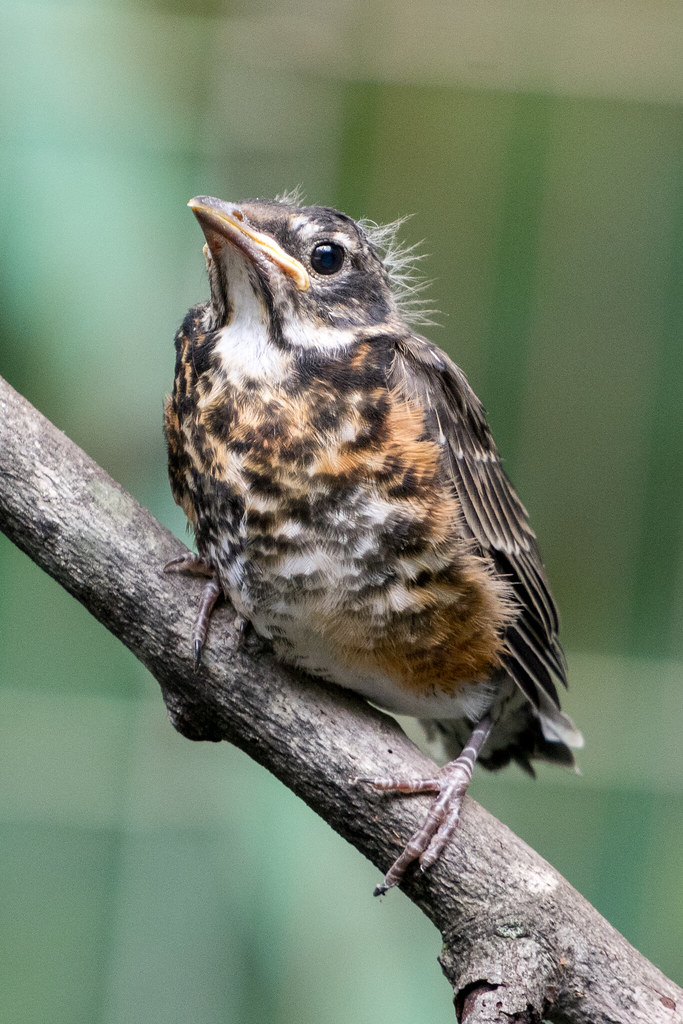 Most baby humans don’t just get up one day and walk. They start with a crawl, and at some point, they figure out how to use a chair or other handy piece of furniture to pull themselves up to a standing position. From there it might take a little coaxing, but they’ll let go and take those first few tentative steps. They’ll fall down a lot.

Baby robins are a bit like that, too. They need to learn how to fly and their first attempts aren’t always successful. Often they may end up on the ground.

In most cases, if you find a baby robin on the ground that appears otherwise healthy and if you can ascertain that it is a fledgling and not a nestling, then you should let it be. Mother bird is likely nearby keeping an eye on things and your stepping in to help, no matter how well-intentioned, will only interfere in their natural development.

If, on the other hand, the fledgling appears to have been injured, you should call a wildlife rehabilitator.

Not sure if it’s a fledgling? You’ll be able to tell by the fact that it has feathers. Fledglings are also able to hop about, while nestlings cannot.

If you find what you’re certain is a nestling outside its nest, then it probably fell or was pushed out accidentally. These young ones are almost always in need of help.

Look around you. Is there a nearby nest in a tree or bush? If you can locate it and reach it, you can help the baby bird by simply picking it up gently and returning it to its home. Don’t worry that your “scent” left on the baby bird will cause the mother to reject it. Robins have a sense of smell, but it’s not all that well-developed and they rely far more on their eyesight.

A mother bird may not say it, but she’ll appreciate the gesture and continue to care for her rescued baby.

If a nest is nowhere to be found, you can simply craft a homemade nest of your own. Using a small container, add straw or other soft, dry material, and gently lay the nestling inside. Then place the “nest” in a tree as high up as you can get it. From a distance, watch to see if the parent birds return. If they don’t come to feed the baby bird within an hour, you’ll need to contact a wildlife rehabilitation center. 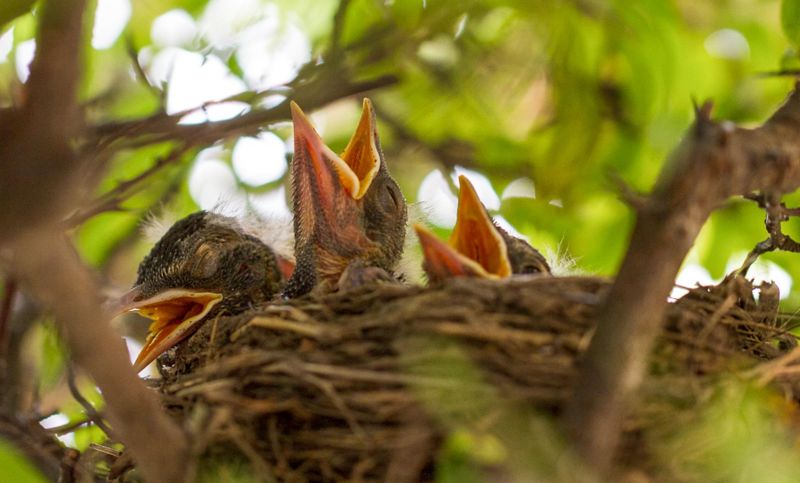 It’s not easy being a bird, especially a robin. We humans may love them, but they have plenty of predators to contend with within the wild.

Blue Jays and crows are two of their more aggressive predators, and they will often seek out their nests to kill and eat both adults and their young. If raccoons find their nests, they’ll break open their eggs and suck out the unborn babies. And some snakes will climb up trees, get into their nests, and swallow the eggs whole.

Robins also have to contend with hawks and owls, foxes, and, of course, cats and dogs.

With so many natural predators–not to mention other ways robins can be accidentally killed–one can occasionally expect to find an abandoned nest of helpless orphaned robins.

What To Do If You Find Orphaned Baby Robins

One of the best things about discovering a nest of baby robins is watching all the feeding activity as the mother and father birds repeatedly fly to and fro from the nest. That’s why it can be disconcerting if the activity suddenly stops.

If you find a nest of helpless baby robins that appear to have been orphaned or abandoned, you may be able to save their little lives by feeding them yourself. Just be sure that the mother and father birds are definitely out of the picture. Baby robins need to bond with their parents and feeding them plays a major role in that process.

It’s easiest to feed baby robins using either an eyedropper or a plastic feeding syringe made specifically for feeding birds. You can easily find these syringes as well as food for baby birds online. As an alternative, you can use a baby formula for human babies or even farina. Just make sure anything you feed them is at room temperature and is of a consistency that can easily pass through the syringe or dropper. That test should ensure it will make it safely down their young, delicate throats.

Baby birds will let you know they’re hungry by opening their mouths wide, so once you’ve given them a full dropper or two, don’t push it if they close down for a bit. They’ll be demanding food from you again soon enough.

You can also just as easily feed baby birds using your hands. Just wash your hands well and put a bit of food on the tip of a finger. Then, lightly touch a corner of their mouth. If they’re hungry, they’ll immediately open their mouths and allow you to feed them.

If they take to your feedings, you should continue to mimic the feeding behaviors of parent birds, and when the babies are developmentally ready, add new foods to their diets like grubs and worms and start dropping food beside them rather than putting it in their mouths directly.

At some point, you’ll have to give them the opportunity to fledge and fly away. Try not to get too teary-eyed when it happens.

Hopefully, this article has answered your questions about what baby robins eat and how their parents help meet their nutritional needs. And while it’s almost always best not to interfere with birds and other animals in the wild, you’ll know what to do if the situation demands it for baby robins.